Few residents of Cerro Gordo county are better known than Mrs. Mary A. Emsley Adams, both because of her long connection with this section of the state and because of the prominent part which she has taken in advancing its moral progress and its intellectual activity. She has also figured prominently in business and displays marked executive force and keen discernment. She was born at Springboro, Crawford county, Pennsylvania, and there resided until she came to Mason City, Iowa, in the summer of 1864. The object of her trip to the west was to visit her brother, J. S. Church, then a resident of Mason City, and following her arrival she began to assist him in the post-office. She recognized the opportunities and advantages offered by the new country and gained her father's permission to remain for a longer period than she had expected. After assisting in the post-office for a time she took up the profession of teaching, which she followed for a few terms at a salary of twenty-five dollars per month. Living in the home of her brother, she had the opportunity to save practically all her earnings and began making investments. Her first purchase brought her some tax title landone hundred and sixty acres of wild prairie.

On the 19th of December, 1865, she gave her hand in marriage to Thomas G. Emsley, who died in 1886, and of whom extended mention is made elsewhere in this work. On the 9th of March, 1905, Mrs. Emsley became the wife of Charles M. Adams, also mentioned elsewhere in this volume.

In city affairs Mrs. Adams has always taken a deep interest, especially along lines contributing to the intellectual and moral progress of the community. She worked untiringly and effectively for the founding of a free public library and she has ever done all in her power to maintain a high standard of education. She holds membership in the Unitarian church and is a most ardent advocate of equal suffrage. Following her husband's death she took her place in the business world and feels that she should have something to do with making the laws which control her property and which govern the various institutions with which she, as a resident of the community, has to do. She sets forth strong, intelligent and logical argument in defense of her position upon this question, and she has done much toward developing public opinion in the community and through the state in behalf of equal suffrage. In manner she is pleasant and cordial and she has many friends. 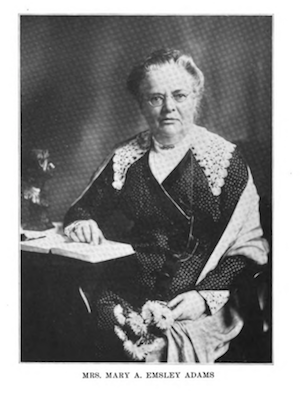