Recognizing at the outset of his career that the only sure foundation upon which to build the superstructure of success is unfaltering industry, Thomas G. Emsley cultivated that quality to the full extent and made it the basis of an honorable business career. He was a resident of Cerro Gordo county, Iowa, and for some years engaged in the banking business at Mason City. He lived in the county for nearly three decades, arriving in 1858 and there remaining until his demise, which occurred June 7, 1886. He was but a youth of fifteen years at the time of his arrival, his birth having occurred in Carroll county, Ohio, December 23, 1843, his parents being W. W. and Beatrice H. (Donaldson) Emsley, the former a native of Yorkshire, England, and the latter of Vermont. The Donaldson family came of Scotch ancestry.

Thomas G. Emsley was left fatherless when but six years of age and from early boyhood was dependent upon his own resources and won whatever came to him of life's opportunities and successes. Attracted by the chances which he believed might come to him in the west, he arrived in Iowa in 1858 and continued to reside in Cerro Gordo county until 1864the year in which he attained his majority. At that time he offered his services to the government in defense of the Union and became one of the boys in blue of Company I, Second Iowa Cavalry. He went to the front with that command and took part in the engagements in which it participated until he was honorably discharged when hostilities were ended.

In 1865 Mr. Emsley returned to Mason City and in the intervening years to his death was prominent in connection with business and public affairs. On the 19th of December of that year he was united in marriage to Miss Mary Church, daughter of the Rev. Jesse E. Church, and it was also in that year that he was elected treasurer of Cerro Gordo county. His official position thus assuring him a good living, he married. His wife was the owner of one hundred and sixty acres of wild prairie land and their cash capital consisted of four hundred dollars. They began their domestic life in a rented house of two rooms and made it their purpose to annually save something of their income, so that their assets constantly increased.

During his experience as county treasurer Mr. Emsley gained knowledge of land and property values in Cerro Gordo county and in adjoining sections of the state, and when he left the office he began dealing in land, advantageously conducting real-estate operations for a decade. In all he was ably assisted and seconded by his wife and ever regarded her sound judgment as one of the most potent elements in his success. They planned together and in 1873, recognizing the opportunity for the establishment of a banking institution at Mason City, they organized and opened the City Bank, working together to insure its success, Mr. Emsley acting as president, while his wife became cashier of the institution. This undertaking also prospered from the beginning and with advancing years the business of the bank grew and eventually the institution was reorganized into the City National Bank, Mr. Emsley remaining active in connection with the bank to the time of his death, which occurred in 1886. Following this event Mrs. Emsley took charge of the business interests and has displayed marked ability in conducting her affairs. She is a woman of keen sagacity and enterprise and she acted as president of the bank until it was reorganized as the City National Bank.

To Mr. and Mrs. Emsley were born two daughters, Mabel, who married Absalom H. Gale and is now deceased; and Lillie, who is wife of James E. E. Markley. Many years have come and gone since Mr. Emsley departed this life, but he is well remembered by many of the older residents of Cerro Gordo county and his record as a brave and loyal soldier, as a progressive business man and as an enterprising and public-spirited citizen still remains, while history indicates his helpfulness in matters relating to the welfare and upbuilding of the county in which he lived. 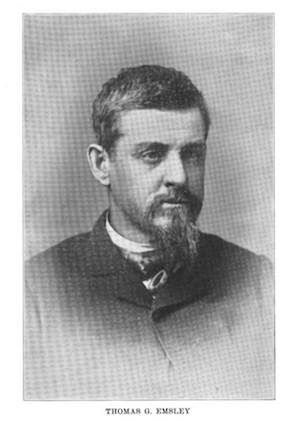