The business record of Norman Densmore is such as any man might be proud to possess, for he has never made engagements that he has not kept nor incurred obligations that he has not met. He enjoys in unusual degree the confidence and respect of his colleagues and contemporaries. He has now passed the eighty-fifth milestone on life's journey yet still remains an active factor in the world's work. Old age need not necessarily suggest idleness or want of occupation. There is an old age which grows stronger and brighter as the years pass and gives out of its rich stores of wisdom and experience for the benefit of others. Such is the record of Norman Densmore, who in 1906 was elected to the presidency of the Iowa Mutual Tornado Insurance Association and has since made his home in Des Moines.

He was born in the state of New York, September 19, 1829. His father, Orrin Densmore, and his mother, Elizabeth (Fowle) Densmore, removed with their family to Wisconsin in 1846 and in 1856 became residents of Minnesota, where the father remained until his death. At one time he was extensively interested in the lumber industry there but the later years of his life were devoted to educational work, during which period he served as assistant state superintendent of public instruction. He passed away in 1878, and his wife died in Minnesota in 1896.

Norman Densmore began his education in the public schools of New York and continued his studies in Wisconsin, after which he engaged in farming and also followed the profession of school teaching for several terms. In early manhood he was likewise engaged on the construction work of the Chicago & Northwestern Railroad and was present at the laying of the first rail and also when the last rail of the division was laid at Mason City, Iowa. Industry and diligence have ever been numbered among his chief characteristics and have been the salient features in the consecutive progress which he has made. In 1877 he removed to Cerro Gordo county, Iowa, where he took up the occupation of farming and was thus identified with agricultural pursuits until 1892, when he retired from active work, although he is still financially interested in farming and is the owner of large landed possessions. His integrity as well as his diligence in business affairs constituted an element in his splendid success. Moreover, it has been characteristic of Mr. Densmore that he has carried forward to successful completion whatever he has undertaken.

In 1892 he entered the insurance business in Mason City and found this also a profitable field of labor. He bent his energies to a thorough mastery of the business, familiarizing himself with insurance in every department. In 1906 he came to Des Moines and accepted the presidency of the Iowa Mutual Tornado Insurance Association and is now the chief executive officer of a corporation which has made for itself a substantial name and place in the insurance circles of the country.

In 1853 Mr. Densmore was married in Illinois to Miss Delia Webster, a native of New York, who passed away in 1898. They had four children, who are still living: Ray, chief clerk with the American Bridge Company of Chicago; Mrs. Elsie Joyner, of St. Paul; Ora, a practicing physician of Fort Myers, Florida; and C. Webb, a lieutenant in the United States navy. A son, Ellis, died in Alabama at the age of twenty-two years, and a daughter, Iva, passed away in Wisconsin at the age of five years.

In politics, since the organization of the party, Mr. Densmore has been an active republican and a leader in the party ranks. He served in the twentieth and twenty-first general assemblies of Iowa and left the impress of his individuality upon the legislation enacted during those sessions. He is usually found where intelligent men are gathered in the discussion of questions of vital importance to the public and, as few men of his years do, keeps in close touch with the questions of the day and the trend of modern thought and progress. He was a promoter of the first successful cooperative elevator company in Iowa, being the founder of the Rockwell Farmers Cooperative Society and the principles used by all successful organizations of that kind. When commission men in the great grain markets of Chicago and Iowa shipping points refused to handle grain shipped to them by cooperative societies, Mr. Densmore called together the cooperative men of Iowa. About seventy of them met at Rockwell and formed the Iowa Farmers Cooperative Grain Dealers Association, now numbering twenty-five hundred members. Now every commission merchant in the country is only too glad to get cooperative grain. At one of the annual meetings of the association, Mr. Densmore was present and addressed the meeting.

He was greeted with loud applause when he came into the hall, for the farmers appreciate what he has done for them. 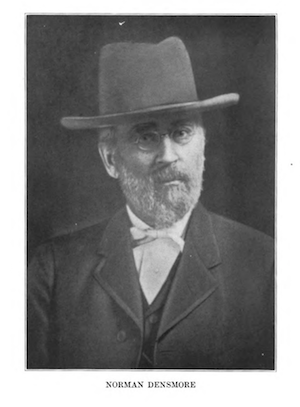