Frederick said shes always wanted to go to the famed festival but promised herself shed only go as a participant.

Defrost was one of the top three VR projects at the festival, Frederick said.

She describes the film as futuristic and sci-fi. John Randal Kleiser, known for films such as Grease and Flight of the Navigator, wrote and directed the film. He wrote the script at the University of Southern California in 1968.

This was Fredericks first producing project, and she credits her North Iowa upbringing for her ability to produce.

I started out at MCHS and Mason City Community Theatre where we were always held accountable to know schedules, build the sets, Frederick said. They took us seriously in Mason and they held us accountable, which helped me later on in life.

She was apprehensive at first, thinking that VR would isolate viewers and they would lose the story.

The thing about doing something weird is you have to have strong content, Frederick said. One thing Ive learned is the content has to justify the technology.

Though the 360-degree view is fun and interesting from an effect standpoint, Frederick said she more interested in telling a story with substance.

I like telling a story to create empathy with the viewer, and I think weve done that here, Frederick said.

Wearing special goggles, viewers watch the film as if they are in the seat of a woman who wakes up after being frozen for nearly 30 years. The woman reunites with her family who have all grown and changed through the years.

During the short film, viewers can turn to look anywhere for a 360-degree view.

Its freeing, like theater, Frederick said. You cant be self-conscious or superficial.

The crew started out with two Go Pro cameras with fisheye lenses both attached to the womans wheelchair. Each scene must be done in one take. In order to direct, Kleiser dressed in hospital scrubs and pushed the wheelchair around.

The actors have to take a different approach with this type of film since the viewer can look anywhere they want to, she said.

You have to get the viewer to pay attention to you, like theater, Frederick said.

Since the first five-minute film, there are now 12 episodes to continue the story.

Instead of the two-camera system, Nokia decided to help with the project to experiment with its new VR technology. It provided the Nokia Ozo VR Camera, a $60,000 device incorporating eight cameras in a circular shape.

Frederick said going to Sundance with this experimental project was validating in seeing other respected producers, actors and directors appreciate their work.

She is the first woman to produce a narrative VR series.

I just want to show other women they can do it, too, especially in the technology field, she said. Were doing a lot of firsts.

Fredericks attention is now turning to her own Iowa Independent Film Festival in the fall. She eventually hopes to bring VR home to Mason City.

Born in Mason City in 1979, Tanna Frederick was the daughter of pharmacist David Frederick and nursing instructor Nancy Frederick. Tanna attended school in Mason City and by the fourth grade began to play in Stebens' Children's Theatre and high school musicals. She graduated from Mason City High School in 1995 and pursued a double major in theater and political science at the University of Iowa. She regularly appeared on stage at the Riverside Theatre and the University Theatre, including in a one-woman play that she had written herself, Questioning Jabe. After graduating as valedictorian of her 1990 liberal arts class at the University of Iowa, Tanna moved to Los Angeles to pursue her career. 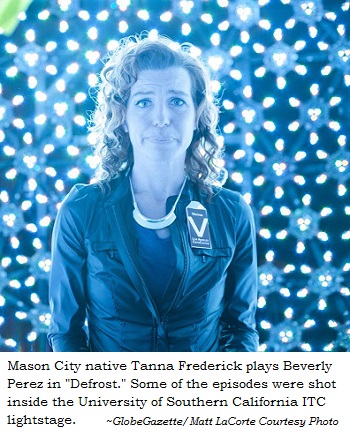