Osage  "Take your horse and buggy days". "I remember the covered wagon days", said Frank G. Atherton, 84, of Osage, Thursday as he reminisced of an era of the past---an era in which he came to Iowa in a covered wagon, an era in which he demanded of his parents that they allow him to enlist for duty in the Union army during the Civil war---at the ripe "old" age of seven.

Atherton, retired editor of the Clear Lake Mirror, has in his possession a letter sent his father Thomas M. Atherton, from Buffalo, N.Y., to Scranton, Pa., and dated January 1, 1856. The yellowed document is one of several mementos the pioneer has of a day gone by.

The elder Atherton, who was registrar of wills in the county at Scranton at that time resigned his position to take his family westward. The Athertons went as far as Prairie Du Chien, Wis., by train then crossed the Mississippi by iceboat. From the river they traveled across prairie land to West Union, by oxen and covered wagon.

After a month in West Union, they were attracted to Mitchell County by a land boom there, and it was there that they spent most of their lives. In 1869, the Athertons moved to Osage.

Frank Atherton well recalls the many tribes of Winnebago Indians who traversed the countryside at that time. "They stopped at houses, begging, and didn't scare anyone but the housewives," he recalls. He remembers also River.

Regretful is the pioneer that his parents refused to give him permission to join the Union army when hostilities broke out in 1861. "Of course, I was only 7 at the time," he remarks with a smile on his face. 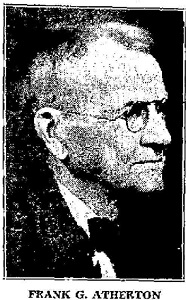