MASON CITY  Chuck Harris wept as he recalled the most harrowing experience he had as a Marine serving in Korea.

"We had to unload a truck," he said. "We opened the back of it and it was filled with dead Marines, their bodies all frozen. It was horrible."

Harris, 86, said his days in the Marines began after he and a friend, Elvin Anderson of Northwood, were riding in a car together in 1951 and heard a radio report about Marines in Korea.

"This was on a Friday night. We said to each other, 'Let's join.' We enlisted at the post office the next day and two weeks later we were in boot camp," said Harris, a lifelong Mason City resident and 1948 graduate of Mason City High School.

"At boot camp we were told, 'Half of you won't come home,' and then it was off to Korea," he said.

It should have been a scary experience for a 20-year-old kid from North Iowa, but it wasn't, Harris said.

He remembers digging long trenches where the Marines would sleep and putting corners in them to hopefully block a mortal shell from hitting them. One night a piece of mortar shell went through his shoe  the most serious injury he received in his 11 months in Korea.

"At night when I was out, I used to sing 'The Marine Corps Hymn' because I didn't want a Marine to mistake me for someone else and shoot me," said Harris.

One unique memory of his days in Korea involved him and a good friend, Kenny Meacham, who was also from Mason City and was in Korea at the same time Harris was. "He was a couple of years behind me in school but we knew each other," he said.

"In Korea, you only had one set of clothes and you had to bathe and wash the clothes in rivers and streams. There was a bridge over the Imjin River that was about 2 feet wide and about 200 feet long with ropes on each side that served as railings," said Harris.

"We would wash our clothes and then hang them on the rope to dry. One day I was on the bridge and Kenny was bathing in the river. His clothes were on the rope. I accidentally knocked them down, and when he saw that, he came up fighting.

"So there we are, the two of us, him stark naked, fighting on this little bridge. Everyone was watching us and shouting. It must have been pretty good entertainment.

"Anyway after a while, we got tired of fighting and began to laugh. We wound up hugging each other. It's the only time in my life I ever hugged a naked man," Harris said with a laugh.

Then he turned serious and said, "Kenny Meacham was a Marine's Marine, a real hero. He earned a Purple Heart. We became great friends after the war and I saw him often until the day he died," he said.

Harris had been working for Northwestern Bell when he enlisted and he went back to work for the company when he returned home in January of 1954. He remained there for his entire career, retiring in 1989.

He and his wife, Dixie, whom he met in Central Park in 1954, have three children, eight grandchildren and 10 great-grandchildren.

Among his points of pride: Winning the state heavyweight judo championship at Ames in 1966; and participating in more than 1,000 military funerals in the past 20 years.

"You've had quite a life," a reporter told him.

He smiled and said, "I did all right." 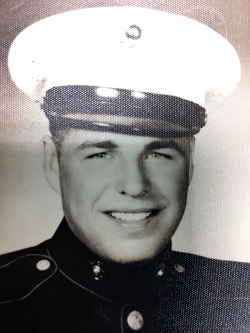