Nels Thorson, president of the Worth County Agri­cultural Society. He was born in Dane county, Wis., on the 24th day of May 1852. In 1868 the family came to Winnebago county and settled on a farm near Forest City. In 1875 the subject of this sketch abandoned farm life and secured employment in a drug store, studying in connec­tion with his work until he was able to pass the examina­tion prescribed for registered pharmacists.

Soon after meeting these requirements he formed a partnership with Matt Johnson, under the firm name of Thorson & Johnson. This firm opened a drug store at Benson's Grove, Iowa. Two years later Mr. Thorson dis­posed of his interest and went to clerking again in Forest City. In 1882 he removed to Northwood and entered the store of Gordon & Hanson, where he remained two years. He then began clerking in the drug store of T. K. Hundeby. After working for Mr. Hundeby three years he pur­chased the business of his employer, and formed a partnership with L. O. Brown. under the firm name of Thorson & Brown, which firm is still in active business.

Mr. Thorson was united in marriage on 8th day of June 1882. to Miss Emma Westbury, the ceremony be­ing performed at Leland. Iowa. Mr. and Mr. Thorson are the parents of five children, three boys and two girls: Ernest is the popular druggist of Thompson. Iowa: Miss Nina is one of Worth county's successful teachers: Arthur is employed in the weather bureau at Dubuque and Mabel and Ansly are still attending the Northwood schools.

From the moment of his arrival in Northwood Mr. Thorson has shown a deep interest in the Worth county Agricultural Society. Probably no other one man has done so much to build it up and make it financially suc­cessful. The same business acumen which he has always displayed in the management of his private affairs he has brought to this society without money and without price. At one time he was president of the society for three years, refusing to be his own successor. But after a lapse of several years he was again prevailed upon to accept the office and he is now serving his sixth year as president of this organization. 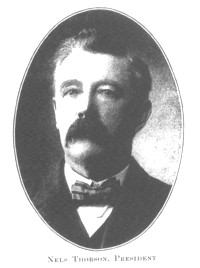