H. C. Finch, general agent of the Equitable Life Insur­ance Co. of Iowa was born in Northwood on Dec. 28, 1873. His boyhood days were spent in attending the Northwood public schools. He graduated from the high school in the class of 1899. During the autumn of the same year he went to West Superior, Wis., where he remained for a period of 18 months. Upon returning to Northwood he engaged in school teaching which be followed for eight terms. During his summer vacations he did insurance work, and so successful did he prove in this line that he abandoned teaching and devoted his entire time to his in­surance business.

In 1896 he became local agent for the Equitable of Iowa and in 1899 had so far made good with the company as to be appointed district agent. In l905 he received another promotion becoming general agent with a terri­tory aggregating seven counties, four being in Iowa and three in Minnesota. This agency has written a million dollars in insurance more than $800,000 being in force.

On the 17th day of April 1894 he was joined in marriage to Miss Addy E. Shaw, who was one of Worth coun­ty's popular teachers. They have three children. Clarence J., William J. and Margaret. Mr. Finch is a member of the Northwood school board. In polities he is an ardent democrat. 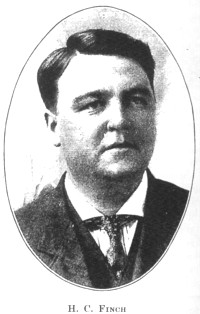