W. W. Hunter, Secretary of the Worth County Retail Merchant's Association, was born in Whitewater. Wis., on the 13th day of December, 1863. In 1868 the family moved to Northwood. where his father, the late William Hunter, engaged in the lumber business. Here the subject of this sketch attended the Northwood schools until the age of 16 years when he became a clerk in the post office where he remained one year. Leaving the service of Uncle Sam he went to work for his father in the lumber yard where he remained for four years. Then he emigrated to Minneapolis where he was employed for three years as bookkeeper for a large grocery firm. In 1894 he returned to Northwood and began clerking for his father, who had in the meantime engaged in the furniture trade. In 1891 he purchased the business of his father and has since continued at the present location.

On Dec. 23rd. 1885, he was joined in marriage to Miss Margaret J. Moir, the ceremony being performed at Huron. S. D. They have three children, Clyde, Ruth and Kenneth.

Mr. Hunter has been justice of the peace for the past eleven years. He is also consul of the Modern Woodman lodge. When the Worth County Retail Merchants' Association was organized he was chosen as its first secretary. In polities he is a republican. 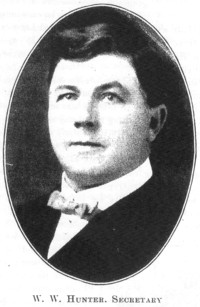