Postville- Services for R. H. Waters, 88, who died Monday, will be held Thursday at 2:30 p.m. in Frankville church. Burial will be in Frankville cemetery.

Herbert Waters passed away at his home in Postville on Monday evening, April 24 at the age of 88. His death followed a four months illness due to heart trouble and complications.

Robert Herbert Waters, the son of pioneer parents, Robert and Sarah McCann Waters, was born on the Waters' homestead in Ludlow township on April 20, 1862. Mr. Waters spent his entire life time in Allamakee county with the exception of 12 years when the family home was in Cedar Falls. He was a farmer and stock buyer, and lived many years on the farm where he was born.

On April 17, 1889, he married Martha Jenkins, also of Ludlow township, and just a week before his death Mr. and Mrs. Waters observed their sixty-first wedding anniversary. They became the parents of two daughters, Geneva and Ruth, both at home.

At the age of 15, he became a member of the Frankville Presbyterian church, and was made an elder during the dedication service of the new church July 27, 1890. He had the distinction of belonging to the same church for 73 years. All during his lifetime he took an active interest in religious activities. With the exception of a few brief periods, Mr. Waters was the teacher of a Sunday School class. While living in Cedar Falls, he became a member of the Gideons and for several years was a member of one of the gospel teams sponsored by this organization. He also helped in the Gideon work by spending considerable time last fall distributing new Testaments to the rural schools in this community.

In addition to his wife, who is ill, and his daughters, Mr. Waters is survived by one brother, George A. Waters of Waukon. 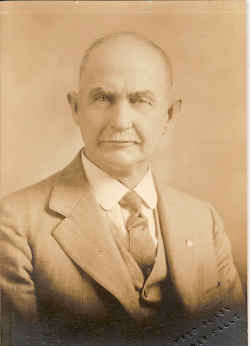