Mass of Christian Burial will be held at 11:00 a.m., Friday, September 5, 2008, at Our Lady of Seven Dolors Catholic Church in Festina, Iowa, with Monsignor Cletus Hawes officiating. Burial will be in the church cemetery.

Friends may call from 3:00  8:00 p.m. on Thursday and on Friday morning until 10:30 a.m. at the Festina Parish Center in Festina. There will be a rosary at 4:00 p.m. and a scripture service at 7:00 p.m. on Thursday. The Schluter  Balik Funeral Home, French Chapel is in charge of arrangements.

Florentina Mary Hageman was born on December 10, 1921, the daughter of Nick and Rosalia (Imoehl) Hageman on the family farm near Festina, Iowa. Florentina attended St. Marys Catholic School in Festina and helped various families in the area when new babies were born. Florentina worked and lived all her life on the family farm. She was an excellent cook and baked delicious pies and cookies. She enjoyed sewing, crocheting, playing cards and spending time in the summer with her nieces and nephews. Florentina was a member of the Our Lady of Seven Dolors Catholic Church and the Rosary Society. 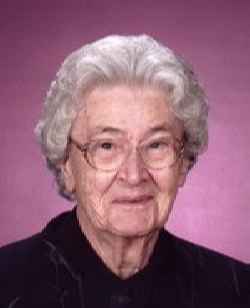