Funeral Services will be held at 11:00 A.M. Saturday, May 8, 2010 at Decorah Lutheran Church by Rev. Bryan Robertson, with burial in the Hauge Lutheran Cemetery in rural Decorah.

Visitation will be from 4:00-7:00 P.M. Friday, May 7 at Fjelstul Funeral Home in Decorah and on Saturday one hour before the service at the church.

Nellie Inga (Hanson) Falck was born on August 25, 1919 at home on the family farm in Madison Township west of Decorah, the daughter of Sam P. and Bertha E. (Olson) Hanson. She was baptized on September 21, 1919 at Decorah Lutheran Church and confirmed on November 12, 1933 at Hauge Lutheran Church in rural Decorah. She attended Rotvold Country School near Hesper, Iowa, through the eighth grade.

Nellie was united in marriage with Harry Falck on October 25, 1947 at the Decorah Lutheran Church Parsonage. This union was blessed with nine children: Phillip, Harold, Marie, Suzanne, Willie, Steve, Henry, Rebecca and Inga.

After Country School Nellie started working as a caregiver for many families all around Decorah and Winneshiek County. She and Harry also farmed the family farm south of Hesper where they raised their children. Nellie and Harry lived in Waukon for a few years and then she moved back to Decorah after Harrys death in 1980.

Nellie was a member of Hauge Lutheran Church for many years and then Decorah Lutheran Church as well as a long-time member of the Rebekkahs. In 2006, she was presented The Presidents Volunteer Service Award from the Presidents Council on Service and Civic Participation and she was awarded a Certificate of Appreciation from Northeast Iowa RSVP for 555 Volunteer Hours at Wellington Place, since 2003. She loved to bake, making lefse, cakes, homemade bread and cookies, among many other things. For Christmas every year, she would give each of her children and grandchildren a care package of lefse and cookies. Her family was her whole life. She really enjoyed her grandchildren and great-grandchildren and she called everyone on their birthdays. She never missed a baptism or a wedding, where she liked to do the chicken dance. She also liked puzzles and reading the Decorah newspaper.

Nellie became a resident of the Aase Haugen Home in Decorah on January 19, 2010.

She was preceded in death by her parents; her husband, Harry, on March 26, 1980; two sons: Henry in infancy and Harold on July 14, 2006; one sister, Anna Hanson; five brothers: Sylvan, Norman, Helmer, Melvin and Lloyd Hanson; and by several brothers- and sisters-in-law. 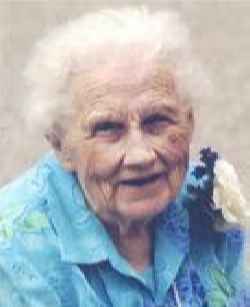