HON. W. H. KLEMME.
Republican Candidate for Representative in the 2Sth General Assembly.
Above we present a portrait of this gentleman. While his acquaintance with the people of Winnesheik County is wide there are hundreds of electors who have never met him and they will be glad to see what the gentleman they have once voted for and elected,and expect to do so again this yearlooks like. He is Hoosier-born, but of German descent. His father was born in Hesse Cassel, and his mother in Darmstadt, but both came to this country in early life before character and habits were formed one at the age of fourteen and the other twelve. Born in Franklin Co , Ind., Feb. 17th, 1849, into a family where religion was a matter of every-day, practical living, Mr. Klemme was educated to a high regard for everything that is right, pure and true. When he was thirteen years old his parents came to Iowa, and in 1862 made government entry of a farm near Ridgeway, of which the senior Klemme yet remains the owner. On this the subject of our sketch learned what the hard work as well as the independence of a farmers life is. When he attained his majority he started in as a farmer upon his own account; but soon after this the railway came along, made a station at Ridgeway, and Mr. K. seeing a business opening at that station engaged in the lumber trade. This occupation he has followed for twenty-two years, and if it has not given him wealth it has furnished him the comforts of a moderate competence. During this time he has held numerous local offices, such as postmaster, justice of the peace, &c. In the latter office he has served twelve years, and it is a matter of pride to him that his earnest endeavor is to act as a peace maker, and prevent litigation rather than foment discord for fees sake. To this end he strives to post himself in the statutes of the state, and reading the Northwestern Reporter in order to lear what are the constructions the higher court gives to these laws. This has made him largely a local advisor to his towns, men in most of the ordinary legal affairs of every-day life. In 1893 he was nominated for Representative to the 25th General Assembly, at a time when there was legitimate doubts as to his success, after the county had been represented by a Democrat for two sessions. Many expressed their doubts as to his ability to make the race but Mr. Klemme went at once into the field, and night and day spared not the least exertion for the benefit of the entire ticket. Making no claims to speaking talent, he did promise to spare no pains, as a working member, if elected. The result was a most triumphant election, and his record as a member shows that he fulfilled every promise he made his constituents. When he goes back as an old member it will be with an added influence that will be still more advantageous to his constituency. The chief characteristic of Mr. Klemme is earnestness and push. Whatever he undertakes to do is done with all his might and with a sincere resolution to accomplish results, His first desire is to ascertain what is right, and to do all that is possible to accomplish it. 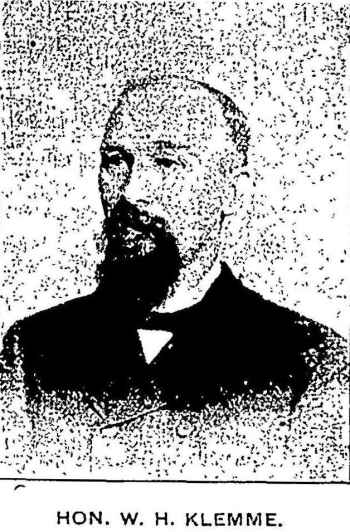