Major A. H. Hamilton, one of Ottumwas best known and widely respected citizens, is celebrating his eighty-ninth birthday today at his home, Woodland avenue and Court streets.

Mr. Hamilton is enjoying good health. He came to Ottumwa in 1854 and took up the profession of a lawyer. In 1858 Mr. Hamilton was elected mayor of Ottumwa and in 1862, he enlisted in the Thirty-sixth Iowa regiment and served during the civil war. In 1869 Mr. Hamilton with General Hedrick purchased the Ottumwa Courier, which they managed until 1880 when the former assumed the business until 1890, and retired from active life.

He was twice appointed state senator and was a delegate to many conventions nominating presidents. He was at the Chicago convention at the birth of the republican party when Abraham Lincoln was nominated in the Wigwam.
===================== 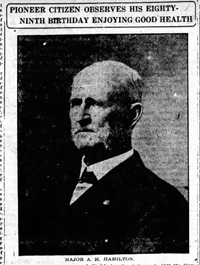