He was born Jan. 6, 1915, in Richland to Frank and Rosia Klein Greiner. He owned and operated Greiner Implement Co. in Ottumwa until he retired in 1980 and moved to Texas. He was a member of Sacred Heart Catholic Church. He married to Dorothy Grimes on May 4, 1937. She died on Oct. 8, 1971. He married Frances Dearborn, who survives.

Also surviving are four sons, Robert of Ottumwa, Ronnie of Selma, Donnie of Clarksville, Texas, and Larry of Blakesburg; a daughter, Cheryl Wernimont of Marion; 12 grandchildren; and a sister, Rosanna Stortz of Libertyville. A son, Raymond Jr., preceded him in death.

the funeral Mass will be at 10 a.m. Friday at St. Mary's Catholic Church, the Rev. James Grubb officiating. Burial will be in Memorial Lawn Cemetery.

Visitation will begin at 4 p.m. Thursday at Reece Funeral Home, with a Christian wake service at 7:30 p.m. that day.

Honorary pallbearers will be Anthony, Tiffany and Jason Greiner. 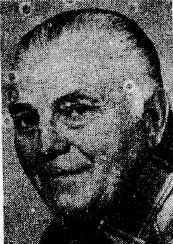