History Repeats Itself as Six Scions Of Gilfillan......

For So Did Four Grandfathers and the Father, Dr. H.J. Gilfillan

That news may be a latent thing, devoid of any colorful quality that would make it appeal as a topic of conversation, yet when recognized as being something of an unusual nature it instantly becomes a matter of general interest, is indicated by the story of the Gilfillan family, published early this week in the Des Moines Register. Through the courtesy of that paper, we are re-producing the picture heading their story.

Van Buren county, and particularly the southern part, where the Gilfillans have made their home, is familiar with the fact that Dr. H.J. Gilfillan, of Cantril, and formerly of Milton, with his estimable wife has reared six sons, each of whom is following his father in the practice of medicine. The mother is the former Miss Clara Moon, of Milton. Three daughters complete the family circle.

Two of the sons, Dr. H.M. and Dr. G.W., are now practising physicians, the former in San Francisco and the latter in our neighboring town of Pulaski. The other four, namely, Clarence N., Earl E., Edwin O., and Homer J., are students of medicine or pre-medical courses.

The present Dr. Gilfillan, Sr., was born in Milton and resided here until he had educated himself for his profession. He then practised in Mt. Pleasant until 1918, returning to Milton for a few days. The family then moved to Cantril, where the doctor enjoys a large practice, as well as over all parts of the county.

The Bert Hotchkiss house in Milton, destroyed by fire last week, was the birthplace of the elder Dr. Gilfillan. The house was 80 years old, having been erected in the early 50's. It was a peculiar coincidence that the mud-plastered auto of Dr. G.W. Gilfillan, of Pulaski, slowly made its way through the crowd of fire spectators that night. That truth is stranger than fiction might well have been said as this young physician drove his car over muddy roads to practice his chosen profession and went by the blazing site of his family's early hearth.

Yes, there is news to be found everywhere. Its very commonness make it all the more difficult to recognize. 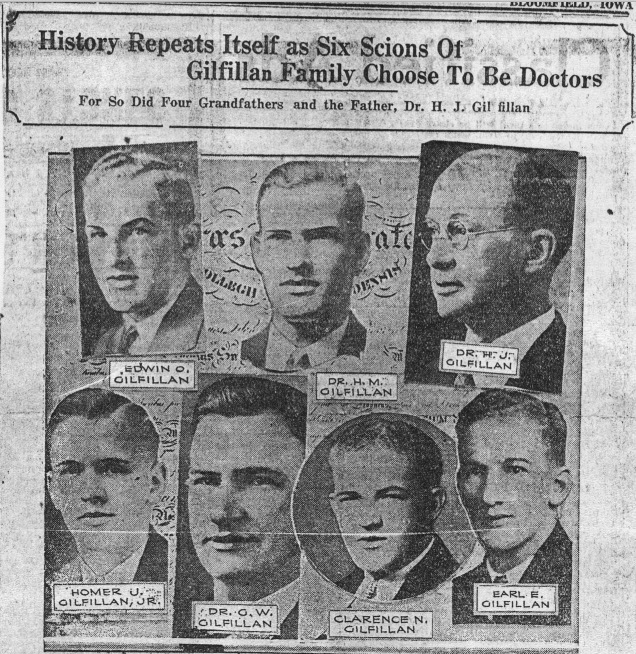