This story comes from the Sioux Center Centennial book of 1991, it was submitted to the book by Lorina Ten Napel (Mrs. Marion) and transcribed for this BIOS by Wilma J. Vande Berg and some research notes added at the end.

Evert Ten Napel, born April 4, 1860, in Vollehove, Overijsel province, the Netherlands. In 1883 he married Pieterje de Vries. They came to America in 1893 with three older children. They first went to Colorado but soon settled in Sioux County. They lived in the southwest part of Sioux Center.

Evert Ten Napel farmed southeast of Sioux Center. The last house they lived in is still standing on 1st avenue S. W., Sioux Center, children H. J. and H. E. remained in Sioux County but in the 1930s all the other children moved to California.

Children born to the couple were:

4.Fanny born 1893 Sioux Center married Fred Kuhl in 1916. They farmed near Sioux Center and they had five children. They moved to California

6.Ralph 1898 Sioux Center married Gladys Eli in 1924, they had two children. He and his brother Henry owned a car dealership in Sioux Center for a time. They lived in Sioux City and later moved to California.

7.Nicholas Clarence born 1901 Sioux Center married Inez Rickman in 1927. They lived in Sioux City where he was a car dealer. Later they moved to California.

9.Anna born 1904 Sioux Center married Richard Deutschman. They had no children. They lived in Sioux City and later California.

OBITUARY OF EVERT TEN NAPEL 1860-1936
Evert Ten Napel died at his home Monday noon, after a lingering illness of some months. He returned from Iowa City only recently having been a patient there for some weeks.
He is survived by his wife and 8 children, 6 boys and 2 girls. They are H.J. Ten Napel of Ireton, H.E. Ten Napel of Maurice, Henry, Clarence, Peter, and Anna Ten Napel of Sioux City, Ralph of Hudson S.D. Mrs. Fred Kuhl of Sioux Center. Two brothers of the deceased, Dirk and John reside in the Netherlands. A sister, Mrs. Van Dalen is also living in the Netherlands.
Mr. Ten Napel retired from the farm 20 years ago, having lived in this community for the past 45 years.
Funeral services will be held Thursday afternoon. 1:30 at the house, 2 p.m. at Central Reformed Church, Rev. Brunsting officiating.
The pall bearers will be J.C. Schalekamp, C. Van Muyden, Fred Cleveringa, L. Hoogland, G. De Bey, and R Van Essen.
Mr. Ten Napel was born in Vollenhare, Friesland, Netherlands, April 4 1860, married Peterje de Vries, May 25, 1883. He came to America in 1893. As Immigrants, together with the Aue family he and his wife were sent to colonize the state of Colorado, where they suffered from lack of equipment almost to the point of starvation. From there they were brought to the Sioux Center community where they have resided since.
Mrs. Ten Napel will remain in the old home, and Miss Pearl Kool, one of her grandchildren, who attends Jr. College at O.C. will make her home with her.
Source: Sioux Center News October 29, 1936

OBITUARY OF MRS. EVERT TEN NAPEL 1861-1941
Mrs. Evert Ten Napel died last Thursday, Sept. 11, 1941, at the age of 80 years. Death was due to a stroke. Mrs. Ten Napel was born April 4, 1861, has spent over 45 years of her life in this community and is the last of her immediate family to pass away. Her husband preceded her in death, three years ago.
Rev. Arnoys and Rev.Meengs conducted the funeral services at the First Reformed Church in Sioux Center, on Tuesday Sept. 16, 1941 and interment took place at the local cemetery.
Pallbearers include C.K. De Vos, P. Bos, W. Cleveringa, D. Rozeboom, G. Van Donkelaar, and C. Van Muyden.
Mrs. Ten Napel is survived by six sons and two daughters, They are Pete and Clarence, Sioux City, Manus and Herman Ten Napel of Ireton, Henry and Ralph, Calif., Anna Mrs. (Duitsland) Sioux City, and Fanny (Mrs. Fred Kuhl) of Sioux Center.
Source: Sioux Center News September 18, 1941 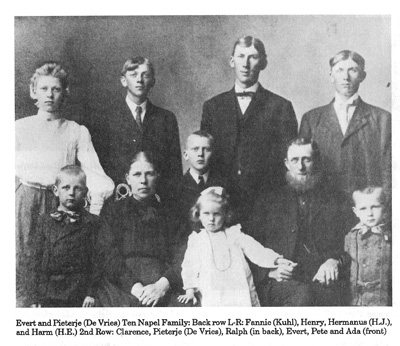