This story was taken from the Sioux Center Centennial book of 1991 page 549, submitted by Gene Jongewaard. Transcribed for this BIOS by Wilma J. Vande Berg and some research notes were added at the end.

He came to America in 1884 and went to work for the C.N.W. Railroad, serving Lake City, Mason City, and Tracy Minnesota, while living in Lake City Iowa. He came to Sioux Center in 1907 and became manager of the creamery. Later he had a grocery store on Main Street for fifteen years.

Joe married Elizabeth Sinnema 1869-1949, who was born in St. Anna, Netherlands in 1886. Their two children were Ed TeVeltup who operated the little corner store know as Eds Grocery. Their daughter, Kathryn was the wife of the veterinarian Dr. Neal Jongewaard. The Jongewaard children were Beth Eppink and Gene Jongewaard.

Joe was widely known for his duties as Town Marshall and Justice of the Peace. He and his police dog rigorously enforced the traffic laws much to the displeasure of traffic violators. Mr. Te Veltrup also wrote a weekly column of information, instruction, advice, criticism and philosophy under the heading, The Cop Says.

He also did the noble service each week of editing the Looking Back column of items transcribed from the old Holland language files of the Nieuwsblad. no column in that paper had more faithful followers than this view into the years gone by.

(Added note: Many of the researchers delving into the old Dutch newspapers could not read Dutch so the column "Looking Back" was very beneficial for past news of the town. Today all that needs to be done is to type the Dutch words into a translator such as Google translate and some semblance in English of the article can be had. )

Excerpt from:
The Book Sioux Center News - Half Century of Progress Edition Golden Jubilee 1891-1941 goes back to 1870 in history.

Page 13, Joe TeVeltrup the cop was appointed Jan 27, 1930 with 12 years of service to the town. He has earned a far and wide reputation for his enforcement of law, particularly traffic laws.

Page 57, J. TeVeltrup, the Cop Joe TeVeltrup was 76 years old last April 8 (in 1941) From his bearing and behavior he could pass for a man of 60. He walks with a quick step, carries his shoulder back, is alert to every movement on the streets of our town as he performs his duties of city marshal. Mr. Te Veltrup is a man of action. He enforces the law with vigor. His activities are not confined to being the Cop for he is in charge of water pumping and is a custodian of city hall, and a member of the city park board. He is also the only justice of peace in Sioux Center. Until a few weeks ago he was Secretary of the Civic Club and this is one of the reasons that the club has continued to function thru dull season and bright. The minutes he wrote for the club will in the future be valuable documents on the affairs of the town.

Mr. Te Veltrup is widely known as The Cop of Sioux Center. His reputation was earned because of his rigorous enforcement of the traffic laws in the downtown district. Many of the traffic law violators find pleasure in cussing Joe, but a real tribute to his efforts can be found in the fact that we have never had a serious accident on this federal highway which passed over our main street. It took courage to enforce the law in the face of abuse from touring big wigsbut Joe has courage and we are proud of him for it.
The town has watched him help the youngsters across the street on their way to school for many years. Every child knows him and likes him, and parents somehow come to share this view.

The nickname The Cop earned in the line of duty, has been spread far and wide in the columns of the Sioux Center News. Mr. Te Veltrup writes a weekly column of information, instruction, advice, criticism, and philosophy under the heading The Cop Says. He also has been doing the noble service each week of editing the Looking Back column of items transcribed from the old Holland language files of the Nieuwsblad. No column in the paper has more faithful followers than this view into the years gone by.
( He is pictured in the actual paper.)

A few Biographical Notes:
Mr. Joe Te Veltrup was born at Zaandam, Noord Holland, Netherlands on April 8m 1865. His father Evert Te Veltrup, was a member of a stock broker firm. Joe, after his elementary and high school education, attended a military school at Kampen in Overijsel, Netherlands. He became a Corporal and served in the fifth regiment at SHertogenbosch, and at Nymegen, Gelderland. He worked in a department store in Amsterdam for a short time, then he decided to go to America.

Joe arrived in Orange City on May 28, 1884. The next morning he was walking behind a cultivator on the farm of Koen De Jong. He worked on the farm for several years, even trying his hand at farming for himself but found other occupations more suitable to his training. He went to work for the C. N. W. railroad serving at Lake City, Mason City, Sioux and Tracy Minn. until 19078 when he returned and settled in Sioux Center. He became manager of the creamery and after 8 years went into business for himself for 15 years. In 1939 he became Town Marshal the position he holds today. (1941)

Mr. Te Veltrup married Elizabeth Sinnema in 1886. Their two children are both resident s of Sioux Center. Edward Te Beltrup their son, operates the little corner store known as Eds Grocery. Their daughter Katherine is the wife of our veterinary Neal Jongeqaard. Mrs. Te Veltrup is well known and an active person also.

Page 122 - Looking Back to July 27, 1892 of the Sioux Center Nieuwsblad, Translated in a Column from Dutch to English by Joe Te Veltrup. Because of the historical significance of the News of the issue of that paper it was included in this historical transcription. See pages 122 and 123 of the book.

OBITUARY OF JOHAN M. JOE TE ELTRUP 1866-1950
Sioux Center News, February 23, 1950
Johan M. Te Veltrup was born in The Netherlands, April 6, 1866. He came to America at the age of 20. He married Elizabeth Sinnema on October 14, 1886. They lived on a farm near Orange City for some twelve years. Both their children, Edward & Kathryn were born there. The family later moved to Lake City when Mr. Te Veltrup worked for the Chicago-Northwestern Railroad as a coal processor. After about eight years with this company he moved his family to Sioux Center where he managed the first Creamery business here for Jelgerhuis before going into the General Merchandise business with Charles Vander Meulen as his partner. The latter went to Pella and Joe remained in the general merchandise store until about 1922 when he went to work for the town as Marshall, where he remained until he retired when his health began to fail about a year and a half ago.
He was preceded in death by three brothers, Harry of Johannesburg, South Africa; Peter, a Captain in the Dutch Navy who died during the German Occupation in World War II and Melchoir, better known as Mike, who died in Idaho just a few months ago. His only sister died about 10 years ago.
He is survived by his son Edward and daughter Kathryn (Mrs. Neal Jongewaard both of Sioux Center.
NOTE: Another article in the same paper tells of his 27 years as town marshal, he also wrote a column in the Sioux Center News, called "The Cop Says"

OBITUARY OF ELIZABETH MRS. JOHAN JOETEELTRUP
Sioux Center News, November 2, 1949
The community was saddened this week at the death of Mrs. Joe Te Veltrup, long time resident of Sioux Center, and wife of Joe Te Veltrup well-known former marshal of this city. Mrs. Te Veltrup had broken her hip several months ago and was being cared for at home after a period of hospitalization in Sioux City.
Mr. & Mrs. Te Veltrup celebrated their Golden Anniversary on Oct. 14, 1936 and held open house for the occasion. Most folks in this area will recall the occasion when hundreds of their friends visited with them on that day. Thirteen more years have passed and their 63rd wedding anniversary was necessarily passed very quietly this past October 14th.
Funeral services will be held Wednesday at 1 o'clock at the home and 1:30 at Central Reformed Church with Mr. Clyde Johnson officiating.
Elizabeth Sinnema was born in St. Anna Parcchie, Friesland, The Netherlands on January the 10, 1869. She was the daughter of Siebe & Tryntje Sinnema. At the age of 12 years she came with her parents to America who made their home in and near Orange City, Sioux County, Iowa.
She was united in marriage with Johan Te Veltrup on October 14, 1886. To this union were born two children, Ed & Kathryn, Mrs. C. R. Jongewaard both of Sioux Center. In 1907 the Te Veltrups moved to Sioux Center, where she passed away on November 21, 1949. She is survived by her husband, two children and two grandchildren, Gene Jongewaard of Indianapolis, IN and Mrs. Herman Eppink of Washington, IL and three great-grandchildren.
While on her sickbed she had made a special request to have sung at her funeral services the song beginning with word "Called Home to Rest, Beyond the Vale of Weeping". 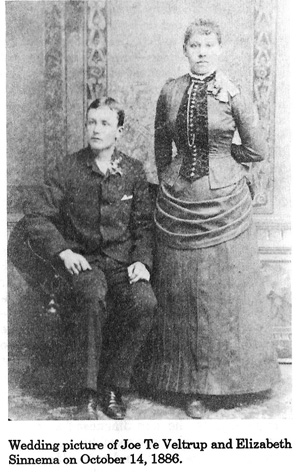