This family story was taken from the Sioux Center Centennial book of 1991 pages 551 and 552. The story was submitted by a Ter Haar family member, it was transcribed for this BIOS by Wilma J. Vande Berg and some research notes were added.

Gerrit and Johanna came to the United States as young people in their late twenties after a 10 day voyage by ship in either 1892 or 1893. The came from the town of Aalten, province of Gelderland, in the Netherlands. Aalten is near the border of West Germany and about 30 miles from Arnhem, the capital of Gelderland. They traveled to Orange City, Iowa where they obtained jobs with farmers. Gerrit Ter Haar was the only member of his family to leave the Netherlands; however, Johanna Kleinwolerink had two brothers living in America.

On December 20, 1893 they were married at the home of her brother, Gerrit Kleinwolterink. Their first home was two miles east of Sioux Center. The following children were born to Gerrit and Johanna:

OBITUARY of Gerrit Ter Haar
Source: Sioux County Capital (7-2-1936)
Born: March 6, 1864
Died: June 25, 1936
Mr. Gerrit Ter Haar Sr., died of heart failure Thursday evening.
The funeral was held Monday at 1:30. Reverend Mr. Brunsting officiated.
Mr. and Mrs. Ter Haar had been making their home with their daughter, Johanna, Mrs. Riphagen.
This is the second death in the Ter Haar family. Mrs. John Ter Haar passed away some weeks ago.
Mr. Ter Haar is survived by his wife, Johanna W. (Kleinwolterink) TerHaar and three son and two daughters namely John, Will, Henry and Dora, Mrs. Kempers and Johanna, Mrs. Riphagen. All the children live in the Sioux Center vicinity except Will who resides at Sioux City.
OBITUARY of Johanna Mrs. Gerrit Ter Haar
Mrs. Gerrit Ter Haar, 78, called By Death.
[*Mrs. Gerrit Ter Haar, nee Johanna Kleinwolterink; see the print] ...............................etc.
Mrs. Ter Haar is the former Johanna Kleinwolterink and was born in Aalten, Holland, coming to America about 50 years ago. She has lived near Sioux Center ever since. In 1893 she was married to Gerrit Ter Haar who preceded her in death about 6 years ago. Survivors include: John. Mrs. James Kempers (Dora) and Mrs. Joe Riphagen (Johanna). Two sons preceded her in death, Henry in infancy and Will died in 1937. There are also 17 grandchildren surviving and one great grandchild
The Sioux Center News, THURSDAY. MAY 21, 1942 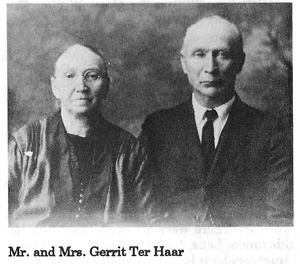