The family history was taken from the Sioux Center Centennial book of 1991, and submitted by Fannie and Edna Schut; transcribed for this Bios by Wilma J. Vande Berg

Evert Vermeer was the son of Jacob Vermeer and Aaltje Peterson Vermeer. He was born at Harderwijk, Netherlands, on March 11, 1854.

When Evert was eight years old and his brother Peter was five, their mother died of tuberculosis. To provide a mother for his sons, Jacob Vermeer married Jannetje Luchtenberg who had an eleven year old son, Hendrik. (He later chose the name Vermeer.) A daughter, Peterjen, was born Mach 13, 1867.

Evert immigrated to America with his family in 1867. They came to Detroit and from there traveled to Alto, Wisconsin. In 1872 the Vermeer family moved to west Branch Township, Sioux County IA. They traveled in a covered wagon caravan. Some of the livestock was taken with them.

Evert Vermeer married Hendrikje Sneller at the home of the brides parents on May 4, 1877. Hendrikje was the daughter of Rijk Sneller and Matje Juffer Sneller. She was born October 13, 1853. Her birth place was Elberg, Netherlands.

The newlyweds moved to a farm west of Alton and became members of the Alton Reformed Chruch. A daughter Aaltje (Mrs. Peter S. Schut) and four sons named Richard, Jacob. Gerrit and Peter were born there.

In 1855(?), the family moved to a farm one nile south and one mile east of Sioux Center. This farm was a homestead. They united with the Frist Reformed Church of Sioux Center. On this farm two sons and five daughters were born. One son Evert died at the age of one. The second son was also named Evert. Daughters were Martje (Mrs. Hendry De Boer), Jannietje (Mrs. Asa Muilenberg), Diresje (Mrs. Henry Ramaker) Hendrika (Mrs. Henry Mol), and Pietje (Mrs. Albert Ramaker).

By good foresight and hard work, Evert Vermeer acquired twelve hundred acres of the best Sioux County land. He had little formal education and went to work early. He educated himself and was considered a leading citizen of the community.

He helped organize churches, banks, and other institutions and enterprises and was on many boards of those with which he associated. He was a life long member of the consistory of the Frist Reformed church of Sioux Center.

He was generous with is donations to church and charities, and with becoming modesty. When his church at Sioux Center was destroyed by a tornado, he gave $975, but would not raise it to $1000 as he thought it would look too much like vain display. That was one-twenty-seventh of the entire cost of the church.

In 1927 Evert Vermeer suffered a massive stroke, just before their fiftieth wedding anniversary. That fall their eldest daughter, Aaltje Elle and her husband Peter Schut and two daughters moved into the Vermeer home to care for their parents.

It would be difficult to say how many descendants there are but each year in July they still gather for a reunion.

The contributions of the descendants to society are numerous, including, doctors, lawyers, teachers, farmers. political leaders, and church leaders.

Research notes added by the transcriber.

Obit of Evert Vermeer.
Evert Vermeer
1854---Nov. 7, 1934.
In 1823 in the Netherlands Jacob Vermeer was born. His son Evert was born in 1854 also in the Netherlands. When Evert was 12 years old in 1866 the family moved to Wisconsin where Evert received his early education working in a grocery store. For 5 years they lived in Wisconsin and 1871 they moved to the dangers and the hardships of pioneer life in Sioux County. The Ed. G. farm place was their homestead. This farm is located 1 mile south and 1¾ miles west of south Sioux Center.
Jacob was better financial fixed then most of the early settlers and, therefore, didnt have all the hardships to endure that most of the settlers did. He did remember, however, the trouble he had with the wolves stealing his sheep.
On May 4, 1877, Everet married Aaltje Sneller, and settled on a farm near Alton and 1885 he moved to the farm on which Lyda Vermeer now lives which is one mile south and one mile east of south Sioux Center. He lived there until 1914 when he moved to the Pete Schutt residence in Sioux Center. Mr. Vermeer died on Nov. 7, 1934. His wife had died on Sept. 25, 1931.
Mr. Vermeers family now number 21 living children including the ones they married , 2 children are no longer living, 88 grandchildren including 17 who have married into the family, and 24 great-grandchildren. This splendid family have kept themselves closely knit together. They hold about 6 family reunions a year and never is there any sign of a break in their relationships toward each other. There list of contributions to our community include: Sunday school teachers and superintendents, school teachers, doctor, consistory members, political leaders, town council member, members and officers of cooperative boards, farm organization leaders and too many others to mention. In all walks of life they have been influential. Their achievements cannot be measured or enumerated.
The original family were the parents Mr. and Mrs. Evert Vermeer and the following children: Aaltje, Mrs. P. Schutt, living in Sioux Center; Richard S., living 1 mile east and 1½ miles south; Jake E., living 1 mile south; Gerrit, a doctor in Sheldon; Peter, living 2 miles south and 1½ east; Evert, passed away when 1 year old; Maggie, Mrs. H.T. De Boer, living 2 miles south and 1½ west; Jennie, Mrs. A. Muilenburg, living 1 mile south and. ¾ mile east; Grace, Mrs. H. Ramaker, living in Sioux Center: Ed, who passed on after a brief illness in Sioux Center 1931;
Hattie, Mrs. Dr. Moll living in Grundy Center; Priscilla, Mrs. B. Ramaker, living 2 miles east and 2 miles south of Sioux Center.
Source: Sioux Center News of July 31, 1941

Obit of Heintje (Hendrikje) Mrs. Evert Sneller 1853-1931
Mrs. E. Vermeer, 77, Passed away Friday
October 13, 1853---- Sept. 25, 1931
Mrs. Vermeer. was born in Elburg, Netherland on October 13, 1853.
Her maiden name was Heintje Sneller. She came to America with her parents at the age of twelve. They lived in Alto, Wis. for five years and in 1871 moved to Sioux County. She married Evert Verrneer on May 4, 1877 by Dr. Bolks, and they, Mr and Mrs. E. Vermeer, settled on a farm near Alton. Seven years later they moved to the farm south-east of Sioux Center which is known as the Vermeer homestead.
They lived on this farm for thirty years and then retired to Sioux Center.
Mr. and Mrs. Vermeer had twelve children in their fifty-four years of married life. Two of the children have gone beyond, Evert died as a baby in 1877, and Edward died early this summer at the age of thirty-seven. Those remaining to mourn the departed mother and wife are: her hus
band, and the children, Mrs. P. Schut, Richard, Jake, Dr. Gerrit, Peter, Mrs. H. De Boer, Mrs. A. Muilenburg, Mrs. H. Ramaker, Mrs. H. Mol and Mrs. A. Ramaker. There are also fifty grandchildren and five great-grandchildren, and one sister, Mrs. J. De Zeeuw.
Mrs. Vermeer was always an active church worker and a devoted housewife. She died on at the age of 77 years, 11 months and 12 days. Rev. Lubbers from Doon spoke at the house and also aided in the funeral services at the church, Rev. Brunsting conducted the church services.
Source: Sioux Center News of Oct 1, 1931 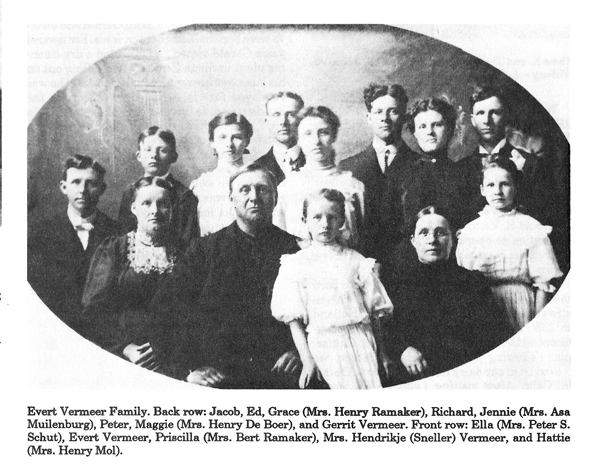