This story was taken from the Sioux Center Centennial Book of 1991 which has history dating back to 1870. The family story was submitted to the book by Bertha Rensink. It was transcribed for this Bios by Wilma J. Vande Berg of the Greater Sioux County Genealogical Society. Some corrections were made and additions were added at the end.

Gerrit J. Vreeman was born July 18, 1874 in Laren, Gelderland, Netherlands, and came to Alton, Iowa on March 22, 1890. Gerrit came with his father, William Vreeman, who married Libby Wiechers, a brother and three sisters. [error  see below]

[INSERTION BY THE COMPILER - Upon researching the birth of Gerrit Jan Vreeman found that he was born Gerrit Willem Vreeman on 18 Jul 1874 at Oolde Lochem, Laren Gelderland, Netherlands . His father was Garrit Jan Vreeman and mother was Hendrika Koerselman, as stated the mother died in the Netherlands and found that Hendrika Koerselman Mrs. Gerrit Jan Vreeman died at 51 years on 30 Mar 1891at Oolde Lochem Laren, Netherlands. Source www.wiewaswie.nl
Further proof that the father of Gerrit W. Vreeman (also referred to as Gerrit Jan) was Gerrit Jan Vreeman is that he was in the 1900 census of West Branch township as born May 1831 Holland emigrated in 1893 widowed, was living with his daughters family, Bertha Mrs. Henry J. Wissink, also see his obituary at the end of this BIOS]

Their journey to America involved three weeks on the boat and one week on the train in route to Alton, Iowa, where they were met by a relative of Mrs. Vreeman. Gerrits mother Hendrika Koreselman Vreeman had passed away previously in the Netherlands. Hendrikas sister Mrs. Beltman wrote to her brother- in- law, William Vreeman [Gerrit Willem] to come to America with the children because there was plenty of work for them. One of Gerrits brothers and one sister remained in the Netherlands. It was a very difficult decision for the father William Vreeman [error  was Gerrit Jan Vreeman] to leave behind some of his family, however, the two children that remained were engaged to be married. He finally made this decision to go to America for his childrens future. They moved to the Sioux Center area in 1890 and Gerrit worked for different farmers, the last being Derek Lammers.

On April 23, 1900 he was married by Rev. De Pree to Chirstine Kosters, a neighbors daughter. The next year they moved to the Doon, Iowa, area and farmed there until 1905. Next they moved to Hawarden, Iowa and bought the farm buildings and later the land. Their first car was a Mitchell. They were charter members of the Lebanon Christian Reformed Church. Five children were born at the Hawarden farm place, two boys and tree girls.

In the fall of 1915 they bought the Wandscheer family homestead south west of Sioux Center which had a newly built house on it that had been built in 1910. It had replaced a house that was destroyed by by fire in 1909. At the time the Ramaker family was living on the farm. The Wandscheer children had moved to make their home in Sioux Center, where most of the men owned and operated threshing machines in the area. Five children were born there. One boy and one girl died in infancy. The oldest six children graduated from Sioux Center Christian School, the other five graduated from the country school that was a half mile down the road.

Gerit Vreeman was director of the country school for years, he also served in the church consistory and various other town cooperatives. Dairying was his specialty and he brought milk and cream to town every morning with a horse and buggy or spring wagon. Mr. Vreeman was always willing to lend a helping hand in the area and in the church.

In 1925 , Gerrit and Christina made a trip to his homeland Laren, Netherlands. It was such a blessing to once again see the land where they lived and left, and to see this brother and sister who had stayed there, but he was thankful to return to the Sioux Center area which was home to the family at that time. Mother Christina had health problems and bedridden much of the last five years of her life. They decided to move to town in the spring of 1935. They had a farm sale in December of 1934. Christina only lived in town for 22 days before she passed away, they were thankful that they could move together. In 1942, Gerrit Vreemen married Ella De Boer Fredricks and they had twelve good years before Gerrit passed away in 1954 having reached nearly 80 yearts of age. He had a good life in which he saw his eleven children marry and have families, grandchildren and great grandchildren. The children of Gerrit and Christina Vreeman are as follows:

1.John Vreeman, born Jul 3, 1901, married Julia Hollander on Feb. 10, 1927 and they were the patents of ten children. They were from the Sioux Center Iowa area and then Raymond, Minnesota.

2.Hein Vreeman, born November 12, 1902, married Johanna Hulstein on Nov 28, 1923 and they were the parents of two children They were from Sioux Center. Their story is given separately in the book.

3.Gerdena Vreeman, born August 24, 1904, married Louis De Boer on Feb 3, 1926 and they were the parents of three children. They were from Sioux Center.

4.Dick Vreeman, born December 15, 1906 married Marie Roskamp on February 16, 1928 and there were the parents of two children. They were from the Sioux Center area.

5.Christine Vreeman born Dec 11, 1908 married Elmer Den Herder on June 16, 1931 and they were the parents of six children. They were from Sioux Center.

6.Gertrude Vreeman, born January 14, 1911, married John De Boom on August 27, 1930 and they were the parents of seven children. They were from Sioux Center.

7.William Vreeman born March 24, 1913, married Sena Rensink on June 19,1933 and they were the parents of six children. They were from Sheldon Iowa.

8.Bertha Vreeman born August 24, 1915, Married Marinus Rensink on Feb 6, 1935 and they were the parents of three Children. They were from Sioux Center.

10.Etta Vreeman born Jan 14, 1921, Married Lester Heusinkveld on Sep 22, 1939 and they were the parents of tree children. They were from Sioux Center.

11.Lenora Vreeman, Born March 23, 1924, married Henry Heynen on July 6, 1939 and they were the parents of three children. They were from Sioux Center.

Here ends the story submitted to the Centennial book by Bertha Rensink.

**** As is commonly the case, some errors were found in the family story as submitted. Hearsay carried down sometimes gets distorted, through no fault of the author. Often local records are partially incorrect. As the transcriber of this family history BIOS, I feel my insertions and corrections are correct according to the written records.

The following are submissions of research done by the complier Wilma J. Vande Berg.

OBITUARY OF GERRIT JAN VREEMAN 1874-1954 (he was actually Gerrit W.)
Source: Sioux Center News (7-1-1954)
Born: July 18, 1874
Died: June 26, 1954
Son of Gerrit Jan Vreeman, Hendrika Koerselman.
Mr. Gerrit W. Vreeman passed away early Saturday morning at the age of 79 years. Mr. Vreeman came to America at the age of 17 years and settled in Sioux County where he spent the remainder of his life.
He was united in marriage to Christina Kosters (Koster) on April 23, 1900 and to this union the following children were born: John; Hein; Gerdena, Mrs. Louis De Boer; Dick; Christine, Mrs. Elmer Den Herder; Gertrude, Mrs. John De Boom; William; Bertha, Mrs. Marinus Rensink; Ella, Mrs. Gordon Den Herder; Henrietta, Mrs. Lester Heusinkveld and Lenora, Mrs. Henry Heynen. One son and one daughter died in infancy. Mrs. Christina Vreeman preceded him in death on March 22, 1935.
On May 22, 1942 he was united in marriage Ella Fredriks, who now survives. Mr. Vreeman is survived by 43 grandchildren and 16 great grandchildren as well as six stepchildren. One brother, William Vreeman and one sister, Mrs. H. J. Wissink survive and three sisters and one brother preceded him in death.
Mr. Vreeman was an active church member and had served for many years on the consistory at the 2nd Christian Reformed church. His sudden passing is mourned by a host of relatives and friends.
Funeral services were held Monday afternoon, June 28, at the home and the Second Christian Reformed church with Rev. C. Tuinenga and Rev. P. A. De Jong officiating. Burial was in the Sioux Center Community Cemetery and arrangements were by Vander Ploeg's Funeral Home, of Sioux Center.
Special music was furnished by a quartet and Mrs. Marion Broek was organist. Pall bearers were Gerald Vreeman, Clifford De Boom, Roger Den Herder, Wilmer Vreeman, Gerrit W. Vreeman and William Gene Heynen.

OBITUARY OF CHRISTINA KOSTER _ MRS. GERRIT JAN VREEMAN 1883-1935
Source: Hawarden Independent (4-4-1935)
Born: April 24, 1883
Died: March 22, 1935
Married to Gerrit W. Vreeman April 23, 1900 MRS. GERRIT VREEMAN IS DEAD
Former Eagle Township Woman Passed Away March 22nd
Mrs. Gerrit Vreeman of Sioux Center, who formerly lived on a farm in Eagle townshhip, passed away at her home Friday morning, March 22nd. Funeral services were held at the Second Christian Reformed church in Sioux Center with Rev. Vander Werf of Orange City in charge. Mr. Vreeman, who has been seriously ill for some time, was unable to attend the services.
Christina Kosters was born in Sioux County April 24, 1883, so was about 52 years old at the time of her death. She had been in poor health for some time and recently the family moved from the farm to Sioux Center.
She is survived by her husband and ten children. She also leaves four brother and three sisters to mourn her death.

Further proof of family history-
OBITUARY of Gerrit Jan Vreeman born May 1831-died 20 Jan 1909 father of Gerrit W. (J.) Vreeman 1874-1954
Alton Democrat of Saturday Jan 30, 1909
Gerrit Jan Vreeman died at the home of his daughter Mrs, Wissiuk one and a half miles north of Middleburg on Wednesday January twentieth 1909 from the infirmities of old age he being seventy seven years and eight months old. Deceased was born in the province of Gelderland in the Netherlands and came to the United States in 1893. For a number of years after coming to this country he lived south of Alton. Rev. Heynen of the Christian Reformed church at Hull performed the funeral services at the Middleburg church on Saturday January twenty third. Deceased was a brother-in-law of Mrs. G Koerselman of Middleburg vicinity and Mrs. Henry Beltman senior of Alton. He was the father of seven children. Those living are a son still in the Netherlands, Mrs. Wissink of Middleburg, Mrs. Bosman of Boyden, Mrs. De Jong of Hull, Gerrit Vreeman of Ireton and William of Middleburg, 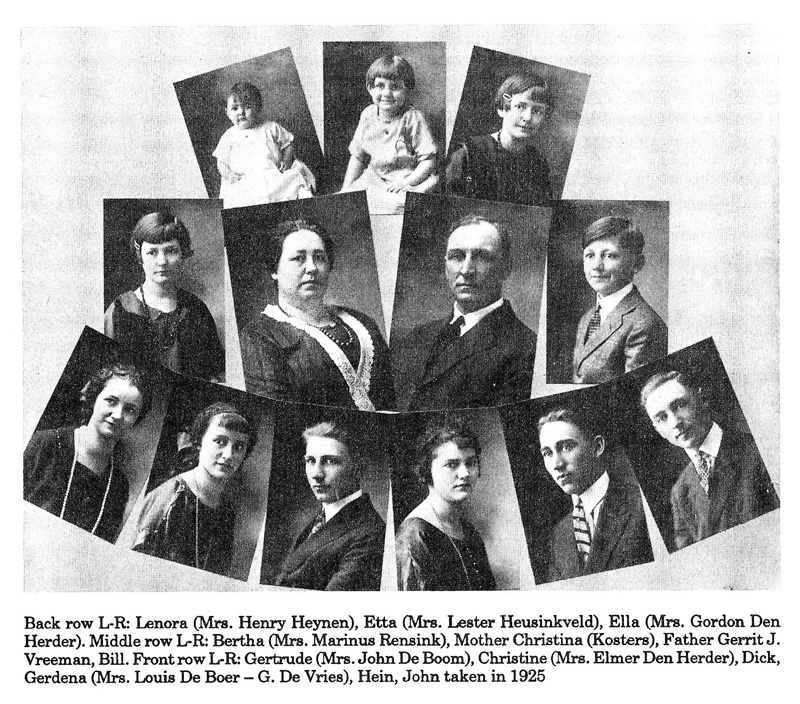