From the Sioux Center Centennial book of 1991, with history from 1870-1991, the following family story was submitted by Adalaide B. Hoeksta. Transcribed for Bios by Wilma J. Vande Berg of the Great Sioux County Genealogical Society.

Berend Ben Wanscheer was born on January 12, 1886 to Johan Dirk Wandscheer and Maria Elizabeth Geerlings Wandscheer on the West Branch township farm southwest of Sioux Center, Iowa. He attended the one room country school. His mother died when Ben was six years old. Ben contracted polio at an early age, which affected is right leg. His father constructed braces to help him walk. The Wandscheer brothers [six boys and six girls] had little formal education: they were ingenious by nature. Then his brothers chafed under the endless backbreaking toil of getting an existence from the soil, the father encouraged them to build something to make work easier. In 1906 Ben and his brothers built their first successful corn-picking machine from two old grain binders, and some shredders. It required four horses to pull it and it picked on row at a time. By 1910 they had invented an engine driven corn-sheller, manufacturing their Steel Hummer from 1910-1927.

Anna Henrietta Kastein was born September 10, 1897 to Gerhard Kastein and Everdena Johanna Heusinkveld at Orange City, Iowa. Her parents emigrated from the Netherlands in 1887. Her parents moved a number of times while she was growing up so Anna had very little chance for schooling. March 10, 1910 they moved to a farm four miles for the Reformed Church, Springfield South Dakota. When brother, Henry, married and took over the farming, they moved to Sioux Center where sister, Lena, married to Jacob Wandscheer lived. Her father bought a house in Sioux Center where her mother lived until she (Anna) married.

On Decemeber 15, 1915 Ben Wandscheer was united in marriage to Anna Kastein. To this union, one daughter, Adelaide Bernice, was born July 10, 1921. When I (Adelaide) was 2 years we moved to a new home located at 437 Third Ave NE in Sioux Center. Each summer my father kept 3 threshing rigs in running order for threshing grain for farmers near Sioux Center and Ireton. Iowa

In the winter he and his brothers spent time in their workshop experimenting with new ideas, which led to a patent for a rotary snowplow. When I was in the second grade we moved to Dubuque, Iowa only for the winter months (1927-1928) while the brothers helped set up the machinery so the snow plow could be manufactured by the Klauer Manufacturing Company on a royalty basis. Back in Sioux Center we attended Central Reformed Church every Sunday. I enjoyed weekly Sunday afternoon gathering with Dads relatives and at various times we visited Mothers and Dads relatives in the Sheldon area. We also made trips with our model T Ford to see relatives in Springfield, South Dakota area.

When I was in the third grade I began taking piano lessons. I thoroughly enjoyed playing the piano and singing in school and church choirs. Much of my time was spent accompanying soloists, small groups and chairs. Mrs. Henry De Kraay was my piano teacher for most of the lessons I took. She helped me get ready for the annual piano high school competition each spring. When I had a desire to play the organ for our church services, she was my organ teacher. After graduating from the Sioux Center High School I went on to further musical training at Central College, Pella, Iowa and Hope College, Holland, Michigan.

After my father passed away June 19150, mother moved to Nooksack, Washington where my husband, Rev. John Hoekstra) served the Reformed church. She lived in her own home wherever we lived from 1953-1975. She made her home the last seven years in her own apartment in our home in Plato township until entering the Health Center at Sioux Center Iowa March 1983. She died July 8, 1984.
- - - -
OBITUARY of Ben Wandscheer 1886-1950
Sioux Center News, June 8, 1950
Mr. Ben Wandscheer passed away very suddenly at about nine o'clock Tuesday evening, following a heart attack. He had reached the age of 62 years.
He is survived by his wife and daughter Adelaide (Mrs. John Hoekstra) of Stickney, SD, and two grandchildren.
He is further survived by three brothers Henry, Dan and Ed, all of Sioux Center, and three sisters Mrs. Gerrit Peelen of Sheldon, Mrs. John Van Wyhe of Lester and Mrs. D. J. Wesselink of Hull.
He was preceded in death by three brothers, Gerrit John, Jake and Gerrit who died only a few weeks ago. Also preceding him in death were three sisters, Mrs. Neal Punt of Sioux Center, Mrs. John Dykstra of Boyden and Mrs. John Postma of Sioux Center.
Funeral services will be held on Friday afternoon at one o'clock at the home and at one-thirty o'clock at the Central Reformed Church.
_ _ _ _
OBITUARY of Anna (Mrs. Ben) Wanscheer 1897-1984
Source: Sioux Center News (7-18-1984)
Born: September 10, 1897
Died: July 8, 1984
Anna Wandscheer, 86, of Sioux Center died Sunday in a hospital in Sioux Center after a brief illness.
Services were at 10:30 a.m. Friday in the Central Reformed Church. Dr. Mert De Velder, the Reverend John Hoekstra and the Reverend Dennis Wilcox officiated. Burial was in Memory Gardens. Visitation was from 7:30 to 3:30 p.m. Thursday in the Vander Ploeg Funeral Home in Sioux Center.
Mrs. Wandscheer, the former Anna Kastein, was born September 10, 1897 in Orange City. During her early years, she lived in the Sioux Center, Hull and Boyden area and also in Artesian and Springfield, South Dakota.
She married Benjamin Wandscheer December 15, 1915, in Sioux Center. They made their home in the Sioux Center area. He died June 6, 1950.
In 1953 she moved to Nooksack, Washington, to be near her daughter. In 1975 she returned to Sioux Center. She was a member of Central Reformed Church.
Survivors include a daughter, Mrs. John (Adelaide) Hoekstra of rural Hull; three grandchildren, and three great-grandchildren. 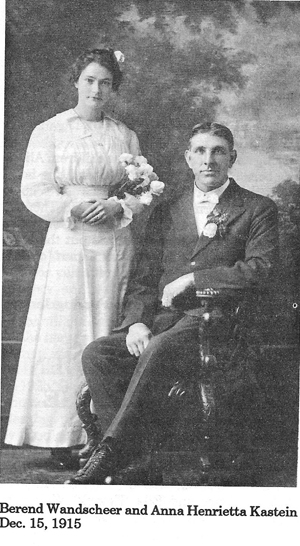