The following is a family story that was in the Sioux Center Centennial book of 1991, which had history of the town from 1870-1991. The Gerrit Wesselink story was submitted by Alice Wells and Pearl Bruinsma, who were granddaughters of Gerrit and Grada. Transcribed by Wilma J. Vande Berg

Gerrit Wesselink came to Sioux County Iowa as a single man with this brothers famly. They came from Greenleafton, Minnesota, in 1872. His brother was Dirk Jan Wesselink and Dirk with his wife and four children settled on a homestead near Sioux Center, Gerrit homesteaded a farm two miles east of the DVDB Radio station.

One of the first tragedies to hit the pioneer settlement in the area happened on September 26, 1873 when Gerrits brother Dirk Wesselink went with Gerrit Kleuvers to the Rock River to get timber. They were crossing the river when the oxen and wagon turned sharply spilling the two men in the river and they broth drowned Dirk Jan Wesselink left a wife, Johanna Gezina Lubbers Wesselink and six children; Berendina Mrs. M. Borgman, Alieda Mrs. A Vander Stoep, Dirk Jan Wesselink, H. B. Wesselink, Gezina Mrs. J. Mieras and Hendrik Jan Wesselink. Mrs. Dirk Jan Wesselink remarried Harm Jan Wissink who had twelve children from his previous marriage. They had two children together also. It appears the Wissink household at one time numbered twenty children which led to the necessity as described in the Story of Sioux County by Charles Dyke, to move the home of both families to provide enough room for the two families.

Thje families of the two sons of Gerrit and Grada Wesselink are as follows:

1.Gerrit Jan, known as Reverend John Wesselink was born July 28, 1875 near Sioux Center. His wife, Anna was born at Holland Michigan. He became a minister and his first church was The Reformed Church at Maurice Iowa. He then was the pastor of the First Refomed church at Pella, Iowa. Later became president of Central College in Pella during the depression years. His final ministry was at Wichert, Illinois. They were the parents of two children: Elizabeth Wesselink who was a registered nurse and went to nursing school in Chicago with her cousin Pearl Wessilink Bruinsma from Sioux Center. Elizabeth married a Canadian doctor and she died from acute pneumonia in her early twenties.

The son of Reverend John Wesselink was William Wesselink who was a teacher and later became the Dean of Buna Vista College in Storm Lake IA.

OBITUATY - Gerrit W. Wesselink 1844-1918
Wesselink, Gerrit W. born 22 Feb 1844 died 13 Sep 1918 buried in Memory Gardens cemetery Sioux Center, IA.
See the obit of Grada Rensink Wesselink 1854-1929 for more family information.
Netherlands birth record has Garrit Willem Wesselink born 22 Feb 1845 Aalten Gelderland Netherlands to Hendrik Jan Wesselink and Aaltjen Degelink. They were married 6 Oct 1874 Orange City IA.
There was an obit in the Sept 18, 1918 issue of the Nieuwsblad but it was so dark and illegible.
------
Sioux Center Nieuwsblad of Sept 25, 1918
Friday 13 Sept a very sensitive blow struck me as the Lord, after a prolonged part of my life, lost my loved one and father, G. W. Wesselink. In the age of 73 years and more than six months. In his life he always revealed himself to be of the lord, in his afflictions he was always very patient, relying on the Lord to give an outcome. He has passed away in the hope of eternal life, and we though sad, need not grieve, as those who have no hope. Where life was to him Christ, his dying is a gain for him, and he has been taken to the dwelling by his Savior.
Friends and neighbors, who have assisted us in our trial, and gave expressions of Sympathy, we are thankful . The family Wesselink.

OBITUARY - Grada Rensink Wesselink
Wesselink, Grada born 1854 died Aug 20, 1929 buried in Memory Gardens Sioux Center IA.
Death Record lists parents as G. J. Rensink and Jenaker Te Bokkel. She was born 28 July 1854 Lintelo Gelderland, Netherlands.
Find a Grave lists husband as Gerrit Willem Wesselink, children as John Wesselink and Henry W. Wesselink. She was buried in Memory Gardens cemetery Sioux Center. IA.
-----
Nieuwsblad of Sioux Center Aug 21, 1929 In Dutch
Attempted translation:
Tuesday night Mrs. G. W. Wesselink died after a long period at the age of 75 years. Her husband died about 11 years ago. The old mother, who was well and clear in spirit until high age, has been declining the last few years. The Forces moved on and the bodys abilities diminished; the last few months she was extremely sick. The deceased is survived by her two sons Rev. J. Wesselink and Henry Wesselink, who is also a foster daughter, Minnie. The funeral was on Friday on an hour at home and at half past two a service in the First Ref. Church. 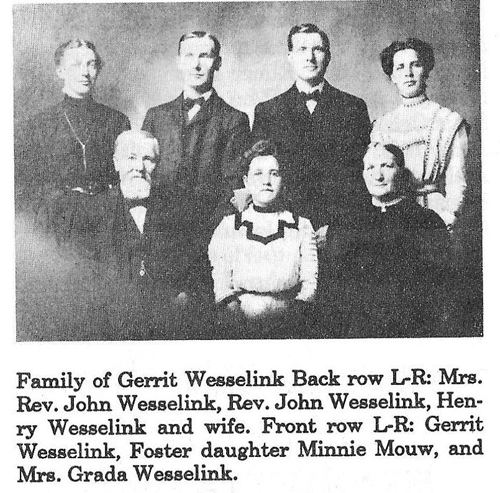