This family history was taken from the Sioux Center Centennial book of 1891 page 659, submitted by Mrs. Martha (Wierda)Van Roekel. Transcribed for Bios on this site by Wilma J. Vande Berg.

Martin Wierda's ancestry has an interesting account of the peril of crossing the ocean in route to America in 1864. Martin Wierda's father Leuwe Wierda came over from Holland at the age of ten with his parents Folkert Baukes Wierda and Tryntje Kate' Speulstra and two sisters. The sailing vessel they embarked from Holland in was a three mast ship that was in a ship wreck and lost the mast in a storm. The vessel had to make landing in Portugal and remained there six months to get it repaired, so that it would be sea worthy again. The name of the ship was 'Langeres' which means long trip. The captain's name was Dykstra. The captain was so distraught about the debts acquired on repairing the ship that on the way over from Portugal to America he committed suicide before the ship landed.

The family first went to Detroit, MI, then to Zeeland MI, as they had been helped to come over by Martin's grandmother's relatives, the Vande Luysters. Later Martin's grandparents moved to Orange City, IA in 1876. Martin's parents stayed in Michigan where Martin grew up and married 1911. After marriage Martin and Ida De Lange Wierda moved to Rock Rapids, IA where he was a painter and later to Rock Valley, IA where he was a farmer, Martin Wierda settled in Sioux County in 1922.

Martin Wierda was born March 10, 1891 at Zeeland, Michigan to Leuwe Wierda and Hemke De Groot Wierda . He was joined in marriage to Ida De Lange who was the daughter of Rev. and Mrs. Thomas De Lange. Martin and Ida Wierda were the parents of five children Lewis, Delia, Henrietta, Thomas and Martha.

Martin Wierda was a well known interior and exterior painter. A memorable experience was the sharing of a buggy and team of mules as part of his payment when he helped out at the Vande Berg Horseshoe Garage during the slack painting season. Martin and Rena Wierda resided the major part of their Sioux Center life at 452 3rd Ave NE. The Wierda family consisted of the following children: 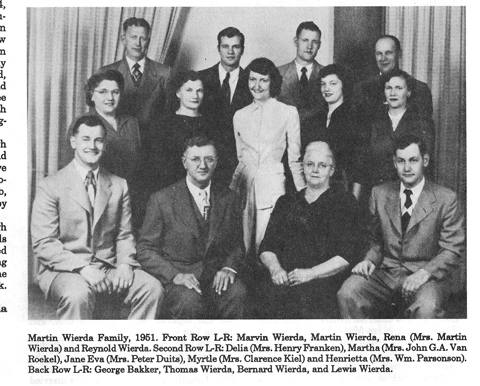