Nathaniel Reeves Edwards was the son of Judith C. and George A. Edwards of Pittsylvania County Virginia, and was born April 7, 1827. He spent his early childhood in the Virginia area.

On November 4, 1850 he married Turner F. Layman, and to this union, according to family records, two children were born. Both his wife and children died in an epidemic.

Nathaniel Reeves Edwards then married Lucinda Francis Angle, daughter of Peter Angle, Jr and Nancy Ziegler on Dec 24, 1857. To this union were born a son and a daughter, Peter Layman Edwards and Lucinda Reeves Edward (Allen). The death in December 1861 of Lucinda Francis Angle Edwards left Mr. Edwards with the responsibility of raising two young children during the difficult Civil War and post war period.

Mr. Edward fought in the Civil War as a Private in Co. 1, 21 Virginia Infantry, in the Regiment known as the Turkey Cock Grays of the Confederate Army. He was wounded, and on July 20 1861 was discharged.

After 1870, Mr. Edwards then married Jerusha Allen Covvey, widow of Joshua Covvey. There was no issue from this marriage.

Nathaniel Reeves Edwards was a farmer and blacksmith in Virginia and continued this profession when he came to South Dakota. According to his service records, he was a large man 66 tall, having a light complexion, blue eyes, and brown hair. In Per and Selma by Melvin Johnson, P. 18, he was known to his fellow neighbors in South Dakota as Hysakrotchen It is interesting to note in the Sioux County Independent published in Calliope March 1, 1883, Vol 5 No. 42 that Uncle Nat Edwards returned from this trip to Virginia having been on the road about ten days. He brought a number of families and young men with him who will locate in this vicinity. There are many of the descendants of those early pioneers that still remain in the area.

Mr. Edwards was committed to furthering the education of the areas young people, and he donated the land on which the Edwards School was located 2 miles west and 1 mile north of Hawarden. The school bore his name until its closure.

(Hawarden Independent of Oct 22, 1891 page 5.
N. R. Edwards, one of the oldest settlers in Union county died at his home in Virginia Township about 3 oclock Monday morning from an affliction of the throat and lungs, at the advanced age of nearly 70 years. He was born in the state of Virginia and moved to South Dakota soon after the war, having resided in Union county for over 24 years.)

Peter Layman Edwards was the son of Nathaniel Reeves Edwards of Pittsylvania County VA., both families well known in their respective counties, and who trace their lineages to the Revolutionary War.

Peter Layman Edwards was born September 10, 1859 in Pittsylvania County VA. After the death of his mother in 1861, and after his fathers marriage to Martha Jane Ziegler in 1863, Peter Layman, and his sister , Lucinda Reeves, he half sisters, Lucy and Anna, his father and step mother migrated to Union Co. SD., to make their home on a land grant farm west of Hawarden.

On Feb 18, 1888, Peter Layman Edwards was killed in a tragic farm accident while shelling corn. He is buried in the Pleasant View Cemetery in Virginia Twp., Union County SD, which is sometimes referred to as the Miller Cemetery. His son, Peter Jr., his father, Nathaniel Reeves Edwards, his step mother, Marth Jane Ziegler Edwards, Martha Janes father Joshua Ziegler, and the fourth wife of Nathanial Edwards, Jerusha Allen Covvy, are also interred in this family plot.

Although Peter Layman Edwards was only 29 years old at the time of his death, he had gained the respect of the community as a successful young farmer. 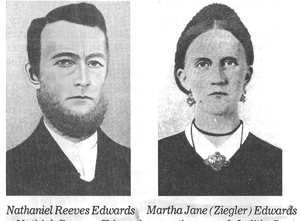