History of the Gregg family, Moses and Anna.

Recently a book entitled Quaker Greggs by Hazel Kendall (1946 Indiana) has shed some light on the Gregg family prior to 1800. Hazel Kendall, a Gregg descendent, was a lifetime schoolteacher who spent her free time researching the family roots. Her book was discovered at the Arizona Branch Genealogical Library in Mesa AZ.

According to Hazel Kendall, all present day Greggs are descendants of the first William Gregg born in Scotland in 1616 . All Greggs are also descendants of Gregory the Great 590 B. C. and Black John (Coat of Mall) 1450-1519.

Half of the bloodline came from Spain in 350 B. C. where she states the ancestral line extends unbroken to Noah. The other half came from middle Greece in 500 B. C.

The progenitor of the Greggs died in Scotland in 860 A. D. From then until 1400-1500 the Greggs were known as Mac Gregors, from the clan of Gregors in Scotland.

In the 17th century thousands of Presbyterian Scotchmen were driven out of Scotland. The Greggs were forced out in 1618, and resettled on the NE coast of Ireland. They lost their barony there and went to the SE coast of Ireland in 1653.

It is presumed that the Daniel Gregg descendants began at Ramelton County, Donegal, Ireland about 1800, of Scotch and Irish descent. A scrap of paper in a diary has printed on it Londonderry, Daniel Gregg, in account with etc Dealer in meal and feeds.

Daniel and Jane Gregg were Moses (1) parents. Moses (1) birthdate is not known, but was probably around 1820 in Londonderry, Ireland. After Daniel Greggs death, Moses (1) helped his mother, Jane carry on the meal and feeds business.

Mary Ann Black Gregg died at Ramelton, Ireland Nov. 25, 1860, three days after the birth of Jane, later called Jennie. After the death of the mother, the second daughter, Isabelle, age 20 took charge of the family with the help of her older sister Mattie, age 22.

There was a large family of Blacks living at Ramelton. Their family was called Ball Green while the Greggs lived on a farm call Killycreen. The family grew up with their cousins, the Blacks, The Spencers, and the Stewarts.

Economic conditions in Ireland were very difficult. The relations between landlord and tenant were unsatisfactory for young men. Because of these conditions Moses Gregg (I) was concerned for his four teenage sons. He had heard about America from his brother, William, who had gone to Canada as a preacher. After much thought, he made the momentous decision to leave his native land. The Black family had already left to seek opportunities in America.

In 1864, Moses (I) and his nine children left for America, arriving in Canada one month later. Uncle William met them in Montreal. Little Annies chief recollection of the meeting was being whisked aside by her sister. Bella, and being given a sound spanking for her forward manners.

The trail is rather indistinct for the next four or five years. Moses (I) evidently obtained a job managing an estate in Toronto. His boys helped him and worked on nearby farms.

It may have been the Blacks, who had settled in Chicago Heights, that enticed the Greggs to come west. In 1868, Moses (I) rented or took charge of a farm near Bloom IL, now part of Chicago. In 1870 or 1871, the Blacks and the Greggs moved west to Cedar Co. and a short time later to Tama Co. in Iowa. They lived on a farm near Gladbrook owned by the Shapely family.

In 1873, Mary Gregg married John Smith and the younger girls, Anna and Jennie Jane took over the housekeeping for their father and their brothers, Dan and Moses (II). As he grew older, Moses (II) was always referred to as Moses or M. Gregg.

Living on various farms during the next few years SE of Traer, they attended a Presbyterian church called Tranquility. The school and cemetery nearby were both called Bakers Grove.

Those were real pioneer days, but they were young and seemed to get a lot out of life. Moses (I) was very strict with the girls, but he allowed them to attend the neighborhood dances. The winters were cold and the houses poorly constructed. Annie Gregg Crouch, daughter of Moses (I) told how she once wrapped the bread dough in a blanket and took it to bed with her to keep it warm.

Anna and Jane Jennie loved to ride horses. They often rode to town, to their sister Marys and to the neighbors. On Feb. 2, 1879, the girls decided to visit their sister, to see her twins, born the day before. They were caught in a blizzard and almost perished. Marys twins were Anna Smith and Jennie Smith Shriner, long-time residents of Hawarden. The twins were named after the sisters who had visited that cold winter day.

An epidemic of diphtheria swept the country in those days. Mary and John lost two boys, Jimmie age 4, and John 4 months, within a 30 hour period. Mary Gregg Smith died in 1881, leaving the twins and a son Willie, age 5. The twins were subsequently raised by Moses (I) and his daughters, Anna and Jane Jennie .
Around 1881, Moses (II), his brother, Dan and his brother in law, John Smith formed a grain and livestock partnership. The Smiths lived at Conrad IA, the Greggs at Gladbrook, IA.

In Jan of 1884, Moses (I) died of a stroke. He was buried in Bakers Grove Cemetery between Gladbrook and Traer. On Jan 1, 1889, John Smith married his deceased wifes sister, Jane. On Jan 1, 1889, Mose M. Gregg married Anna Stauffer, original from Mt. Pleasant PA. She was of Pennsylvania Dutch descent The Stauffer family had moved from Pennsylvania to Gladbrook, IA, in 1890. Anna met Mose while she was attending the Academy at Toledo, IA. Anna Stauffer had four brothers and four sisters.

Mose and Dan continued in the livestock business the several years, they were hit again with a go West fever. John Smith, their brother in law, had purchased a farm SE of Hawarden, later farmed by Oscar Norberg. In 1899. Mose and Dan bought a farm near Cherokee, where they lived for only on year.
In 1900, M. Gregg and brother, Dan bought a farm NE of Hawarden for $65 an acre. Tenants lived on the farm but the brothers and their sons farmed it. Once a month they would make a trip to Cherokee by horse and buggy to check on that farm. Finally they struck a deal whereby Dan took the Cherokee farm and Mose the one near Hawarden.

Around 1907, Mose had one of the first cars in Hawarden. It was a Ford purchased so they could go back and forth to the Cherokee farm. But the car wouldnt run when they needed it, so they traded it for a Marion one they considered a pretty good car. A one cylinder Cadillac was next, It cost $1025.

The tops and windshields were taken off the cars as Mose feared they would get cut if there had been an accident. A few years later Warren and Bill went to Sioux City to buy a car. Several garages each had a real good car owned by a little old lady. They bought one of these good cars. They drove it home and the next day it rained. They walked to the farm as they didnt want to get this good deal of a car muddy.

There were no gas stations at the time so Ralph, Will and Warren would walk to the hardware store to buy a can of gas for the car. The brothers also took turns using the car on their Saturday night dates. In 1917 Harry married Flora McKinnon and they lived on the farm in Eagle Twp. Sec 31, one mile NE of Hawarden for 9 months until Harry died in the 1918 flu epidemic. Mose M. Greeg was active until his death in 1930. Anna died in 1952. Moses and Anna are buried in the Gregg family plot in Grace Hill cemetery, Hawarden Iowa. 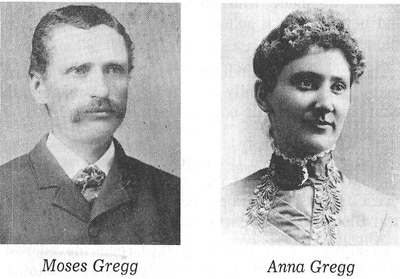