Took an Active Part in the Business and Civic Life of the Community for Nearly 57 Years
B. T. French, for nearly 57 years one of Hawarden's most prominent and -widely revered citizens, passed away at his home here about 7 o'clock Tuesday evening as a result of heart trouble. He had been subject to heart attacks at intervals for several years but time and again he rallied from these attacks largely by reason of an indomitable will. During the past few months, however, he had failed rather steadily, although he was bedfast only about 16 days preceding this death during which time he was under the constant care of a trained nurse. The end came Tuesday evening, however, with unexpected suddenness.

Bayard Taylor French, son of O, L. R; and Cidney French, was born August 2, 1860, in Morrow county, Ohio, and died at his home in Hawarden August 29, 1939, at the advanced age of 79 years and 27 days. He grew to young manhood in Ohio but before he became of age he joined his cousin, the late John H. Queal, in the retail lumber business near Des Moines. The business was carried on under the firm name of J. H. Queal & Co. Headquarters of the company were first established in Des Moines but later moved to Minneapolis. For nearly forty years this company operated a large line of retail yards in Iowa, Minnesota, South Dakota and Wisconsin, disposing of their line in 1918 to the Thompson Yards, Inc., a retail branch of the Weyerhausers. For many years Mr French served as vice president and general manager of the Queal company.

Mr. French left Ohio in June, 1880, and came to Sheldon, Iowa, where he spent about one year in the lumber business. He then spent part of a year at Cambridge, Iowa, going from there to Bradgate in December, 1881. Mr. Prench preceded the construction crews of the Chicago & North Western Railway through northwestern Iowa, establishing lumber yards at nearly every point for his company in advance of the railroad. Thus in the spring of 1882 he located lumberyards at Havelock, Laurens and Sioux Rapids, then spent a portion of the summer of 1882 in Wisconsin, shipping lumber to the new towns being established along the railway, returning to establish yards at Sioux Rapids, Sutherland and Paullina. He located at Sutherland in August, 1882, and in October came to Hawarden and established a yard here just a few weeks before the railroad construction was completed into Hawarden. His home has been in this city continuously since that time.

On January 30, 1884, Mr. French was united in marriage, with a boyhood sweetheart from Ohio, Lue Lincoln Walters, who preceded him in death on July B, 1928. Four children were born to this union, Leslie Ray French, now president of the Queal Lumber Company in Des Moines; one daughter, Helen, who djed in infancy; Clarence Walters French of Hawarden, and Sherman Queal French of the French Lumber Company, Hawarden.

Being actively and intimately associated with the founding of the town of Hawarden, Mr. French always was intensely concerned with its civic and business welfare. When the town of Hawarden was first incorporated, Mr. French served as a member of the first city council and served in this capacity at various times for a total period of eighteen years. While sojourning in Texas during the late winter of 1918, Mr. French was elected mayor of Hawarden without his consent and upon his return declined to qualify for the office. Subsequently, in 1921, however, he accepted appointment as mayor when Dr. F. J. McAllister was obliged to resign the office due to ill health, and he was repeatedly re-elected mayor until 1928 when he asked to be relieved from further service. In 1930, however, he was again prevailed upon to accept the mayor's office and continued until 1934 when the condition of his health prompted his retirement. He thus served for more than eleven years as mayorlonger than any other person in the city's history. These were important years to Hawarden as during this time Hawarden's present electric light plant was constructed, the water tower was erected and the two splendid city wells now in use were conceived and constructed.

Mr. French early became interested in farming and became the owner of several fine farms adjacent to Hawarden. These farms have been his chief business interest since his retirement from the lumber business more than twenty years ago. He was the first president of the Sioux County Farm Bureau and during the World War was in charge of various Liberty Loan drives and was active in every movement of a patriotic character.
He was also interested in Hawarden banking institutions over a long period of years, serving for many years as a director of the First National Bank and when the re organization of this bank was perfected early in 1934 he became president of the bank and served in this capacity until he felt compelled to relinquish the responsibilities about three years ago owing to the condition of his health.

For more than fifty years Mr. French had been a member of the local Masonic lodge, having been the first man to be made a Mason in the old Masonic Hall which was located on the second floor of the building now occupied by the Niemeyer clothing store. He was also a Knight Templar and a member of the Shrine. For years he served as a trustee of the Congregational church. Mr. French never sought publicity, or preferment for himself, although possessing capabilities which would have enabled him to achieve almost any goal which he might have set for himself. He came from a family of lumbermen. His father was a lumberman back in Ohio and his brother, Sam French, devoted his life's work to the lumber business with the Queal company, while two of his sons and four nephews, sons of Sam French, are also lumbermen.

Besides his three sons, he is survived by seven grandchildren, and three sisters, Mrs. Malinda K. Snyder of Shauck, Ohio; Mrs. A. H. Hummel of Phoenix, Ariz,, and Mrs. C. B. Stoner of Short Hills, N. J. Mrs. Snyder and Mrs. Rummel arrived this morning to attend the funeral, as did his son, Clarence French, who has been in the south since last winter. Mr. and Mrs. Leslie French came Wednesday from Des Moines, and their daughter and husband, Dr. and Mrs. John W. Dunning will arrive Friday morning.

Funeral services will be held at the French home at 2 o'clock Friday afternoon with Rev. T. H. Harding, pastor of the Associated church, in charge. Interment will be made in Grace Hill cemetery.

Hawarden Independent of July 5, 1928
MRS. B. T. FRENCH PASSED AWAY
Had Resided in Hawarden for More
Than Forty-four Years. Leaves Husband and Three Sons

Mrs. B. T. French, aged 65, for more than forty-four years a resident of Hawarden, passed away at her home in this city at 9 o'clock this morning following a lingering illness from a complication of diseases. For the past sixteen months she had been a constant sufferer and was bedfast most of the time during the last four months of her illness. She had been failing rapidly for several weeks and the end was not unexpected. Funeral services will be held at the home at 1:30 Saturday afternoon, in charge of Rev, Chas. E. Tower, pastor of the Associated churches. Burial will be in Grace Hill cemetery.

Lou Lincoln Walters, daughter of George Washington Walters and Catherine Bisel Walters, was born in Morrow county, Ohio, Nov. 3, 1862, and died at Hawarden, Iowa, July 5, 1928, at the age of 65 years, 8 months and 2 days. She grew to young womanhood in Ohio and was united in marriage with Bayard Taylor French on Jan. 30, 1884, at Johnsville, Ohio, and they came directly to Hawarden and her home has ever since been in this city.

She was the mother of four children, one of whom, Helen Beatrice, passed away in infancy. She leaves her husband, B. T. French; three sons, Leslie R. French of Des Moines, Clarence W. French and Sherman Q. French of Hawarden; seven grandchildren; one brother Alfred Walters and three sisters Mrs. Howard Condon, Mrs. Lae T. Lewis and Mrs. Jay Snyder.

The life of Mrs. French has been synonymous with the life and growth of Hawarden. Coming here as a bride a little more than an year after the town was established, she has been an integral part of the community life during all the intervening years. She was loved and respected by countless hundreds of people. Always a home lover, her chief interest centered in her family, although she found many opportunities to render service to the community in public and semi-public activities, church work and charitable enterprises. She was a charter member of the First Congregational church of Hawarden and the welfare of the church organization ever was a matter of deep concern to her. For many years she served as a member of the cemetery board in which work she took an unusually active interest and the beauties of the local cemetery are due in large part to her careful planning. She was long a member of the Eastern Star lodge and had been frequently honored by this organization.

But her home and the comfort of the members of her family ever held first claim in her scheme of life. No wife could ever have been more devoted and no mother ever more kind and thoughtful and as friend and neighbor her unselfish spirit knew no bounds The grief of the community at large is deep and sincere at the passing of this kindly lovable, Christian character.

Sherman Queal French, long time Hawarden resident died last Friday in a nursing home in Rock Valley where he had lived the past couple of years.

He was also awarded an Honor 1 lifetime membership at the University of Iowa for his sports interest. See Taylor, former sports editor of the Des Moines Register, mentioned Mr. French in his column many times.

He was a member of the Associated Church, serving at one time as Sunday School superintendent, was a lay speaker on many occasions, and served as state president pf the Iowa Laymens Association of Congregational Churches.

He owned and managed the French Lumber Company which sold to Ward Lumber in 1943, now the Hawarden Lumber Company. He was the first president of Hawarden Chamber of Commerce and served as president numerous years. He was a director of the old Hawarden Athletic Association which purchased the Earl Moetor ball park site and helpful in raising $5,000 for its improvements.

He was a charter member and first of the Hawarden Rotary Club and was elected 25th president of the club. He authored several magazine articles and the open houses at his lumber yard were recognized throughout the area and the lumber industry. 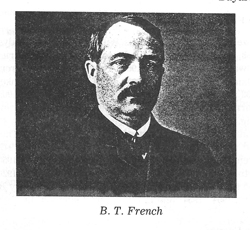