Jacob Loucks Brown, son of James and Eliza Brown was born on Oct 31, Ontario Canada. In the late 1860s he traveled from the east coast of Canada, by boat south to the Isthmus of Panama and up the west coast to San Francisco. He spent three years in the Santa Clare Valley, working for a dairy farmer. This was just after the gold rush. He waited until the railroads crossed the states before returning to Canada.

On Feb 13. 1873 he married Jane Beggs at Kemptville Ontario Canada, near where they both were born. They immigrated to Sac Co. IA, near Odebolt in the fall of 1873 and according to Naturalization papers, he applied for citizenship Mar. 1, 1884 and became a citizen of the USA on Mar 4, 1888. His folks, James and Eliza and family also immigrated to Iowa and settled near Odebolt. Sons Samuel and Earl were born in Odebolt, as were William and Jane. But of whom died as children. Jacob engaged in the Hawarden business in that period, but about 1887, they moved to Howard Lake MN, for a short time, where daughter Carried was born. They moved to Sioux County in Sept. 1887, and lived in Calliope until they purchased the SE ¼ of Sec 14 in Eagle Township, where they moved and farmed. Later he purchased two more 80s in Eagle Township.

On May 4, 1888, his first wife, Jane, passed away. On Mar 13, 1890 he married Margaret Jan Gilmer and to this union were born, Ettie Jane, Harley Garvin, Lura Olivia and Leafy May, who were all raised on the farm.

Before retiring and moving to Ireton, Jacob divided his land between the children giving each on 80 acres. Mrs. And Mrs. Brown helped to organize and build Mt. Joy Bethel Church at Highland in 1895 and were members of this church for many years. Their family also attended this church while they live on the farm given to them. Elgie and Ettie Galbraith, Harley and Alma Brown, Ben and Lura Kooi, Peter and Leafy Bonnema all lived in Eagle township. Later some of them attended the Christian Reformed Church in Lebanon when services changed to American.

While living in Ireton, Jake and Margaret took a trip to Foreston, MN., where they had given farms to Sam and Earl Brown. On the way they met with an accident, which took both of their lives on Aug 28, 1924. They were buried in Pleasant Hill Cemetery, Ireton, Harley Brown and wife of Nebraska City NE, and Leafy Bonnema of Hawarden, IA are the only member of the family still alive (in 1987).

IRETON AND VICINITY - News Items Gathered Expressly For The Independent.

Aged Couple Met With Tragic Death
Mr. and Mrs. J. L. Brown, well known residents of Ireton, were accidentally killed near Olivia, Minn., last Thursday evening, Aug. 28th, while on their way to Foreston, Minn., to visit two of their children. The Ford car in which they were riding skidded in the gravel and overturned, pinning its occupants underneath. The accident occurred about 5 o'clock in the afternoon. Mr. Brown lived only about three hours after the accident while Mrs. Brown lingered for seven hours after the fatal accident. Jacob L. Brown was born in South Mountain, Ontario, Canada, on Oct. 31, 1848, where he grew to manhood.

He was united in marriage with Jane Beggs on Feb. 13, 1873, at Kemptville, Ontario, Canada. In the fall of the same year they immigrated to the United States, settling in Sac county, Iowa, near Odebolt, where they became full citizens of this country. Five children were born to this union, three of whom survive: Samuel W. and Earl of Foreston, Minn., and Mrs. H.W. Gibson of Ireton. In 1887, during the month of September, they moved to Sioux county and settled on a farm in Eagle, township.

Mrs. Brown passed away May 4, 1888. On March 13, 1890, Mr. Brown was united in marriage with Miss Margaret Jane Gilmer at Orange City. Four children were born to them, all of whom survive: Mrs. E. H. Galbraith of Longmont, Colo., Harley G., Mrs. Ben Kooi and Mrs. Peter Bonnema, all of Ireton vicinity.

In the spring of 1917, Mr. and Mrs. Brown retired from the farm and moved to Ireton where they made their home until their death. Margaret Jane Gilmer was born Sept. 6, 1859, at Maquoketa, Iowa. When but a child she moved with her parents to the state of Minnesota and settled near Winsted, where ahe attended the public schools and grew to womanhood. At about the age of 20 she came to Sioux county with her parents and resided on a farm near Ireton until the time of her marriage to Mr. Brown in 1890.

Mr. and Mrs. Brown were numbered among the early settlers of Sioux county, having resided on the farm in Eagle township for twenty-seven years There they tilled the soil and labored to build up for themselves and their family at home. They experienced the hardship and trials of the pioneer days, but with firm determination and courage they toiled with patience and lived to see the fruits of their labors.

The trials of these pioneer days made for each of them a sterling character that made impressions upon family and community alike. They were industrious and prospered in material goods.

Mr. Brown was converted in early manhood and united with the Methodist church, later transferring his membership to the Church of God at Mt Joy in Eagle township. He remained steadfast in the Christian faith till the last. Mrs. Brown professed the Christian faith and joined the United Presbyterian church in Ireton while in her young womanhood. Later she united with the Church of God at Mt. Joy with her husband. She lived true to the faith she professed and in that faith she died. Both were good and loving parents; helpful neighbors, and won for themselves a host of friends.

While on their way to Foreston, Minn., to visit two of their children, they met with an accident near Olivia, Minn., that resulted in their sad death. At the time of their death Mr. Brown had attained the age of 75 years, 9 months and 27 days, while Mrs. Brown had reached the age of 64 years, 11 months and 22 days. They leave to mourn their loss, their seven children and thirteen grandchildren. Mr. Brown also leaves one brother and one sister.

Their remains were brought to Ireton and funeral services were held Monday afternoon at the home, conducted by Rev. F. E. Hamlin, pastor of the Presbyterian church at Royal, Iowa, assisted by Rev. J. L. DeWitt of Ireton and Rev. R. B. Wools ton of Sutherland, Iowa. Interment was made in Pleasant Hill cemetery in Ireton.

Relatives from a distance who attended the funeral were Samuel and Earl Brown of Foreston, Minn,, Mr. and Mrs. Even Lampke and two children, Mr. and Mrs. Alfred Hold, Mr. and Mrs. Sam Gilmer and David Gilmer, all of Cokato, Minn., Frank Story and sons, Will and Frank, of Odebolt, Iowa, and Ben Story of Enid, Okla. 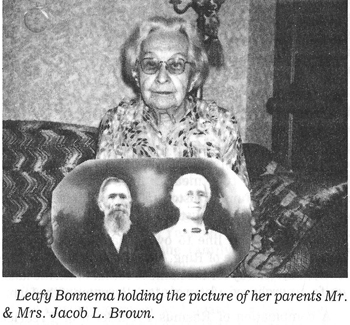