A.U. H. Boyer was born Sept 15, 1856 in Snyder County PA. He was the seventh of eight children born to Benneville and Rachel Ditty Boyer, natives of Pennsylvania. At the age 19, Aaron left Pennsylvania and located in South Bend, IN, where he was engaged as a carpenter and framer for several years.
He was united in marriage on Aug 16, 1883, at Niles MI, to Mary Elizabeth Lentz, who
was born Jan 31, 1861 at Mishawaka, IN. She was the daughter of William Frederick and Victoria Weirs Lentz, natives of Germany.
Shortly after their marriage, they moved to Irquois SD. Where with his cousin, Joseph Boyer,
Aaron operated the firm of Boyer & Boyer, Buggies, Wagons, Etc. They remained there for seven years until in Oct of 1889, when they came to Hawarden, IA. Shortly after their arrival, Aaron commenced the erection of a wagon and carriage factory on Kansas St., just north of the old rink building. Ben Rummel, who was in partnership with George Wheelan in the blacksmith business in Calliope, moved to Hawarden and started his shop in the wagon factory. On Dec. 12, 1889 this ad ran in the Hawarden Independent.

Will be ready to commence business about Dec. 15, a 1st Class

Are to be connected with establishment, ready to accommodate everybody

With repair work and fine carriage and buggy painting, Also

WILL BUILD ALL KINDS OF NE WORK TO ORDER

Also carry for use and for sale a full like of

In Nov. of 1890, Rummel and Wheelan took over the wagon factory and Aaron followed
his trade as a carpenter and operated a large truck garden.
Aaron and Mary Elizabeth Lentz Boyer were the parents of four children, all of whom were born
in Hawarden.
1. Charles Hirma Boyer 1894-1964 married Genevieve Scott, no issue.
2. Benton B. Boyer 1896-1962, married Wilhelmina Minnie Rouwen. Their children were: Betta W. born 1921, married Wayne O. Marienau, parents of Marg, born 1943 married Marshall Mulberry, Marlene born 1943 married Michael Cline and #2 William Polley. Terry W. born 1944 married Pauline Wilson, Benton B. born 1922 married Lois Heuer and their children were: Byron 1947, Luke John 1950, Danny J. 1962 and Corey Joe 1954. (A Few more details in the article in the book.)
3. William F. D. Boyer 1899-1970
4. Mabel Boyer 1900-1971 married Albert Stansbury and #2 Frank Housky one child was William Stansbury 1920 -1973
Although Aaron received only a fourth grade education he read constantly and had a unusually beautiful penmanship. He was a man of splendid Moral character and the strictest integrity.
On Dec 19, 1939 Aaron suffered a stroke and passed away Thurs Dec. 21, 1939. Six weeks later Mary Elizabeth Boyer died and is buried beside her husband at Hawardens Grace Hill cemetery.
Aaron was a member of the Odd Fellows Lodge of Iroquis SD and Dale Lodge A. F. & A. M. of Hawarden. 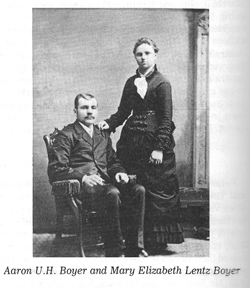