D. K. Bennett was born at Baraboo, Wisconsin on October 15, 1858. H came to Iowa in 1878 and worked ona farm. On March 15, 1881 he was united in marriage to Miss L. Etta Wakeman. And farmed the Wakeman Homestead near Chatsworth until 1894, when they moved to a farm one mile north of Chatsworth.

In 1903 they moved to Chatsworth. For twelve years Mrs. Bennett ran an elevator at Chatsworth. He served on the School Board for 35 years, was Mayor of Chatsworth for 6 years, and was city Treasurer for 20 years. He made a Mason in 1894 and was a member of Dale Lodge No. 456 and A.M. and of Hawarden Chapter R. A. M. He also belonged to the Sioux City Consistory at Sioux City, and the Abu Bekr Shrine at Sioux City. He was also a member of the Loyal Chapter No. 204 of the Order of the Eastern Star at Hawarden.

Lyman Etta Wakeman was born at Cross River New York on Feb 27, 1864. In 1866 when only two years of age she came to Union County, SD, southwest of Chatsworth with her parents who homesteaded there, They traveled by ox team from Omaha to Union County.

She was united with David Knox Bennett on March 15, 1881. They farmed the old Wakeman homestead until 1894, when they purchased a farm of their own, a mile northwest of Chatsworth in Sioux County. In 1903 they moved to Chatsworth.

Mrs. Bennett was a genuine neighbor, assisting in the brith of many babies in Chatsworth.

Mr. and Mrs. Bennett were the parents of Lester, Conrad and Kenneth Bennett, and of Mabel Van Allen, Birdie Harri and Edith Larson

D. K. BENNETT DIED TUESDAY
PASSED AWAY AT CHATSWORTH AFTER LONG ILLNESS
Was 78 Years Old and a Pioneer of the Sioux Valley.Leaves Wife and Six Children
D. K. Bennett, pioneer resident of the Big Sioux Valley, passed away at his home in Chatsworth at an early hour Tuesday morning after fifteen weeks of intense suffering following a stroke which he suffered on Aug. 15th last. His condition following the stroke was extremely critical and although he rallied slightly at times there never appeared more than the faintest chance for his recovery but through all the anxious weeks he maintained an attitude of cheerfulness and hope.
Funeral services will be held at the Methodist church in Hawarden at 2:30 this afternoon, with Rev. J. G. Waterman in charge. Burial will be in the Akron cemetery with members of the Masonic lodge in charge of the service at the grave.
David Knox Bennett was born at Baraboo, Wis., Oct. 11, 1858, so at the time of his death had attained the age of 78 years, 1 month, and 20 days. He grew to young manhood in Wisconsin and came to Iowa in 1878 and worked on a farm. On March 15, 1881, he was united in marriage with Miss L. Etta Wakeman. They were married on the old Lester Wakeman farm, across the river from Chatsworth, in Union county, and during the more than fifty-five years which has intervened they have resided continuously in the Chatsworth community. They farmed the Wakeman homestead until 1894, when they moved to their present farm, one mile northwest of Chatsworth. Since 1903 they have made their home in Chatsworth, during which time they have been mainstays of the Chatsworth community.
After moving to Chatsworth Mr. Bennett operated an elevator for twelve years but owing to poor health sold the elevator and since then has devoted his time to looking after his farming interests. Mr. Bennett served as a member of the Chatsworth school board for 35 years, retiring about five years ago. He served as mayor of Chatsworth for six years and has been town treasurer there for the past twenty years and still held that office at the time of he is death. He also served for many years as a member of the Logan township board of trustees and held numerous other positions of responsibliity and trust in the community.
Mr. Bennett united with the Baptist church when a young man but later united with the Methodist church and has been a regular attendant ever since. For many years he has taken an active and prominent part in fraternal organization work, not only in Chatsworth but in Hawarden and Akron as well, and enjoyed a wide acquaintance throughout this territory. He was made a Mason in 1894 and was a member of dale Lodge, No. 456, A. F. & A. M., Hawarden; Hawarden Chapter, No. 119, R. A. M; Sioux City Consistory; Abu Bekr Shrine, Sioux City, and Loyal Chapter, No. 204, Order of Eastern Star, Hawarden.
But it was for his neighborliness, his unselfishness, his tolerance and his good works among those less fortunately situated that he was most highly honored and revered. It was this bond of sympathetic understanding which held for his a place in the community life which he occupied that is the privilege of but few to enjoy.
Besides his wife, who has been his companion and constant helpmate for more than fifty-five years, he is survived by three sons and three daughters, A. Lester Bennett of Hawarden; Mrs. G. E. Van Allen of Huron, S. D.; L. O. Bennett of Wilmington, Del.; Kenneth Bennett of Chatsworth; Mrs. Orin Harris of Akron, and Mrs. M. O. Larson of Alton. He also leaves nine grandchildren and innumerable friends and many years standing who feel keenly the loss of a devoted friend and an upright and honorable citizen.
The Hawarden Independent
Thursday, December 3, 1936
Hawarden, Iowa

DEATH OF MRS. D. K. BENNETT
Mrs. D. K. Bennett, of Chatsworth, one of the Big Sioux valleys most widely revered women, passed away at 6 oclock Thursday evening, August 5, 1937, at the home of her daughter, Mrs. M. O. LARSON, OF Alton, where she had been cared for during the past seven weeks.
Mrs. Bennett had been ill with an incurable malady for the past year and a half. A year ago in march she submitted to an operation, but obtained only temporary relief. Her condition became progressively worse and much of the time she suffered intensely, but through it all she remained outwardly cheerful and bore her affliction with the utmost, fortitude, her constant thought being of the welfare of her loved ones. The end came as a sweet release from her long months of suffering.
Funeral services were held at her late home in Chatsworth at 1:30 Saturday afternoon and at 2 oclock at the Methodist church in Hawarden, conducted by the pastor, Rev. J. G. Waterman. A ladies quartet composed of Mrs. Nellie Wood, Mrs. W. S. Weaver, Mrs. Harry Swift and Mrs. John Swanson, with Mrs. Earl Slife as accompanist, sang. Interment was made in the Akron cemetery, where her husband was laid to rest only last December.
The Hawarden chapter of the eastern Star had charge of the service at the grave and Mrs. Mildred Anderson, worthy matron, very beautifully sang Now the day is Over.
Lyman Etta Wakeman was born at Cross River, N. Y. February 27, 1864, and passed away at Alton, Iowa, August 5, 1937, at the age of 73 years, 5 months and 8 days. In 1866, when only 2 years of age, she came to Union county, S. D., southwest of Chatsworth, with her parents who homesteaded there, traveling by ox team from Omaha to Union county. There her girlhood was spent and she was united in marriage on March 15, 1881, with David Knox Bennett. They farmed the old Wakeman homestead until 1894 when they purchased a farm of their own, a mile northwest of Chatsworth, in Sioux county, onto which they moved and where they remained until 1903 when they moved to Chatsworth, which has since been the Bennett home.
Thus for 71 years Mrs. Bennett made her home within a small circumscribed area in the Chatsworth community and during this period was intimately identified with, the social, cultural and religious life of the community. She united with the Methodist church at Akron in 1905, later transferring her membership to the Chatsworth church after its establishment. She ever took an active interest in the affairs of the church and was particularly concerned with the welfare of the Sunday school, serving for years as superintendent and as a teacher of Sunday school classes. Even after the church at Chatsworth was discontinued she continued to conduct regular Sunday school classes.
She also took an active part in the work of various fraternal organizations. She united with the Order of Eastern Star at Akron in 1893 and in 1902 served as worthy matron of the Akron lodge. Later she transferred her membership to Hawarden and served as worthy matron of the lodge here in 1912. She was also actively identified with the Royal Neighbor lodge in Chatsworth.
Endowed with a genuine neighborly spirit, Mrs. Bennett was known widely for her good works. Wherever sorrow or affliction descended she was ever ready to lend a helping hand. She loved humanity and she shared the joys and sorrows of all those lives she touched. The Bennett home was ever one which radiated true hospitality and the enjoyment of these associations was only exceeded by the love and devotion which she showered upon the members of her immediate family.
The death of Mr. Bennett on December 1st last was a severe blow to her and she looked forward longingly to the time when she might join him in death. The example of her life and good works will long be cherished by hundreds of people who knew and loved her.
She was the mother of 10 children, six of whom are living. The children are: A. L. Bennett, of Laurens, Iowa; Mrs. G. E. Van Allen, of Huron, S. D.; L. C. Bennett, of Wilmington, Delaware; Mrs. Orrin Harris, of Akron; Mrs. MO. O. Larson, of Alton and Kenneth Bennett, at home. There are nine grandchildren and one great grandchild. She is also survived by two half-brothers, George and Frank Wakeman, both of Akron.
Akron Register Tribune
Thursday, August 26, 1937
Akron, Iowa 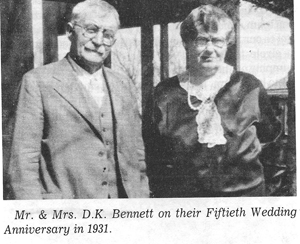