Hendrik Henry Willemsen was born to Willem Willemsen and Berendina Kleinlebbink in Zutphen, Gelderland, Netherlands August 2, 1875 and at the age of 13 years his parents and nine brothers and sisters came to America in 1888. At first they lived near Alton IA and then about 1890 they moved to a farm one mile south of Middleburg, IA in Capel Township Section 32. Henry and his wife Jennie Van Beek farmed there after they were married on March 1, 1900, until about 1912 when they moved to the town of Sioux Center. Henry was a cattle dealer and trucker and the family lived in Sioux Center through-out the rest of their life time.

Jennie Van Beek Willemsen was born October 18, 1880 in Sioux Center to her pioneer parents Gysbert Van Beek and Gysbertje De Mots, who were in the group of the very first wagon train settlers on the site of Sioux Center in 1871. Jennie had six older brothers, one of whom stayed in the Sioux Center area, this was the Cornelius Van Beek family. One brother died at an early age from a diphtheria epidemic and the other four brothers. Henry, John, Evert and Gerrit moved to the wilds of North Dakota in the 1890s. There are bios stories on born the Gysbert Van Beek and Cornelius Van Beek families on this site.

Jennie handed down a story of an experience that happened when she was an impressionable young girl of about 15 years of age. While she was visiting her brother Henry Van Beeks family in the North Dakota territory, (Westfield area), some Indians came to the door and were given some butter and items they requested by the Van Beek family. Henry Van Beek who ran a trading post at that location was friendly with the Indians and told his family to always give the Indians what they requested. However, the very next night some neighbors several miles away were brutally murdered with tomahawks by some irate Indians. Jennie insisted anything that resembled an axe be kept out of her sight after that.

Henry Willemsen and Jennie Van Beek were the grandparents of Don Lee Vande Berg of Sioux Center, husband of the author of this story, Wilma J. Hoekstra Vande Berg. Wilma has also done a Willemsen family history book with many ancestors and virtually all the descendants of the first couple Willem Willemsen and Berendina Kleinlebbink which is still available. Contact query@mtcnet.net . 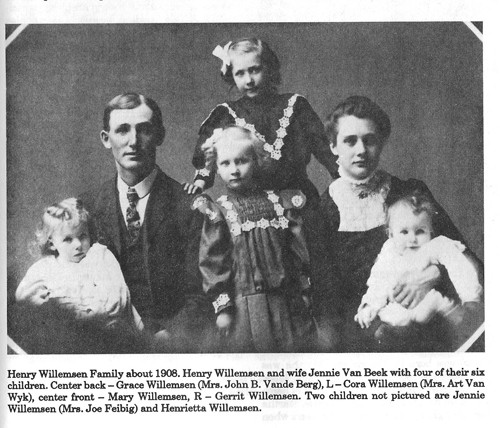