VANDE/N BERG, John and Wilhelmina (KASTEIN)
John Vande Berg was born Jan Vanden Berg in Oldebroek, Holland, on April 3, 1845. He came to America as a single young man in 1865 at 19 years of age. He first settled at Alto WI where many other people from his home in Holland were settling at the time. After a year his parents family, Beert Vanden Berg and wife Aaltje Juffer and their six children joined him in Alto in April of 1866.

John and Wilhelmina Vande Berg left Alto, WI in the summer of 1873 by covered wagon drawn by oxen and arrived at the location they homesteaded near Newkirk, IA Floyd township section 6. They had a very long grueling trip and lost a baby that had to be buried along the way. They lived in a sod house for several years. In 1879 John and Wilhelmina and three children Alice, Gerrit and Ben moved to Welcome Township section 34, about one mile east and one half north of shat is now the northeast edge of Sioux Center.

The area they settled in Welcome Township was nothing but prairie at the time and was called Ninety-Six, until John renamed it Welcome Township, and as the name implies, all were welcome. The family moved into a shanty on the 380 acres that John had purchased for $2.00 per acre. Johns brother Henry, had lived in this shanty the previous year while he was breaking some prairie for his brother. Shortly after moving there a son, Ralph, was born and he is believed to be the first child born in Welcome township. There is more information in the history section of the book (1991 Sioux Center Centennial book) on their early Welcome Township days. Also an article in the 1908 Sioux County Atlas relates the pioneer days in Welcome Township, which can be seen on the site www.iagenweb.org/sioux .

At that time food and staples had to be bought at Le Mars and brought back in barrels. In order to collect enough fuel the children were sent out on the prairie to gather anything that would burn including buffalo and wild life chips. After a house was built a room in the family home was always ready for travelers that stopped by and anyone who needed hospitality.

On one occasion when the children were older, the parents and the two youngest daughters Gertrude and Mina went on an extended trip back to Holland about in 1900, some rough looking characters came to spend the night at the Vande Berg home. The children were quite nervous and they put chairs under the door knob and furniture up against the doors that night. They were glad to see the unwelcome visitors leave in the morning.

A granddaughter of John and Wilhelmina recalled her mother telling of butchering time on the farm. A large brick oven was in the grove for the purpose of cooking and smoking the meat. One day daughters, Elizabeth and Driesje Hattie were stoking up the huge brick oven and an awful nose came from inside, and to their surprise out jumped a very singed cat.

From the time John Vande Berg settled near Sioux Center in 1879 until his death in 1907 at only sixty two years of age, this ambitious sturdy Dutch pioneer had endued many hardships, and accomplished a tremendous amount in the area, with his contribution to the county politics of the day. Along with founding Welcome Township, he actively established the first country schools as well as helped organize the Sioux Center schools. He helped organize the first church in Sioux Center and the family were members of the Reformed church in Sioux Center until 1903. He established several businesses which include a creamery in Welcome Township, and he was one of the founder and president of the Farmers and Merchants Bank n Sioux Center from 1884-1900. He was also reported to have been a trustee at the college in Holland MI in the colleges early days. He traveled to Michigan quite often because of family ties there, also. He acquired many farms in the area and added to his domain by hiring the emigrants to when he sent tickets in Holland to come to America. These emigrants would have to work for him for a certain period of time to repay their passage fee, but occasionally one would leave prematurely only to be tracked down by John and be forced to fill his obligation.

His influence at the time earned him the titled King John. He built a large home on the home place. The main part of the original house remains and has been remodeled over the years. John left all of his children a farm at his death.

John and Wilhelmina moved to Hull in 1903 to spend the last years of their life, however, John died in 1907 and he and his wife had at least lost three children the died at young ages are buried in the family plot in the Sioux Center cemetery. A large granite tombstone marks the plot. The tombstone was so heavy that moving it form the railroad to the cemetery broke any hard surfaces it passed over.

Many local residents of Sioux Center are the descendants of this pioneer family. Many are also scattered about the United States. The author of this article, Wilma J. (Hoekstra), Mrs. Don Lee Vande Berg published a Vande/Vanden Berg Family history book in 1995. It covers most all of the descendants of Beert and Aaltje (Juffer) Vanden Berg. Don Lee is a son of John B. Vande Berg, who was a son of Ben Vande Berg, who was a son of John and Wilhelmina. 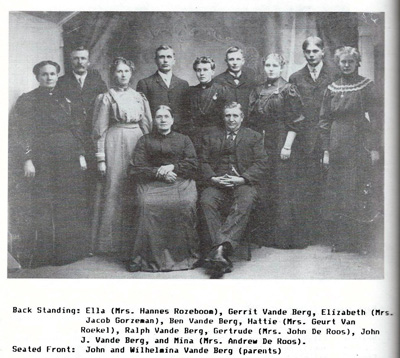