Services were held Friday at 10;30 a.m. at the Central Reformed Church with Rev. Albert Ten Clay officiating and burial was at Memory Gardens Cemetery under the direction of Vander Ploeg Funeral Home. Mr. Mouw was born in Sioux Center April 17, 1895.

The survivors include his wife, Florence; a son, Vernon of Sioux Center; two daughters, Mrs. Glen (Murial) Bell of Storm Lake and Mrs. Eva Hulst of LeMars; a brother Ben, and a sister, Johanna Van Roekel, both: of Sioux Center; nine grandchildren and eight great-grandchildren. During his life, Mr. Mouw spent 69 years with First National Bank. He held every job there, from janitor to president and chairman of the board. In 1911, when he was 16, Mr. Mouw substituted for his older brother, Neal, as janitor of the bank and very soon after, he became an apprentice in the bookkeeping department.

In 1917, Mr. Mouw was promoted to teller and in 1918, he became assistant cashier. His promotion to cashier came in 1947 and a year later, he became vice president of the bank while still continuing as cashier. Mr. Mouw was voted in as president of First National Bank in 1956. Four years later, he yielded some of the heavier duties of his office to assistants A.H. Te Paske and son Vern Mouw. Mr. ouw relinquished the presidency in January of 1977.

Earlier, in 1963, Mr. Mouw became the chairman of the board of First National Bank, a position he still held at the time of his death. The 69 years he worked at the bank was continuous, except for the year he spent in the army during World War I, May 1918 to March 1919. Mr. Mouw went to Camp Dodge in Des Moines for basic training and it was while he was stationed there that he married Florence Balkema, a Sioux Center girl, on July 31, 1918. During the war, Mr. Mouw went to France where he served with a battery commander detail. He attained the rank of corporal.

Mr. Mouw served his country in World War II as well as World War I in the capacity of the Sioux County War Bond sales chairman and also regional War Bond sales director for Lyon, Sioux, Plymouth,
Woodbury and Monona Counties. Mr. Mouw was involved with the Boy Scouts. He was a member of the local Boy Scout troop committee for 20 years (1932-1952) and he was county Boy Scout chairman from 1942-46. He served on the PraireGold Area Council Board from 1943-52, was a member of the Praire Gold executive committee for a period of time and served as a member of the regional board of directors. From 1946-47, he was Iowa Department chairman of Boy Scouts. For his 25 years of service to the Boy Scouts, in 1951, Mr. Mouw was given the Silver Beaver award by the Praire Gold council. Mr. Mouw was a leader in his church as .well. He taught-Sunday school at Central Reformed Church for 37 years and organized the first choir of the church in 1920.

Among the civic posts he held was town clerk from 1920-24. He was a member of the city park committee and was instrumental in starting some of the parks, establishing the band shell and getting lights for the baseball field. He also was instrumental in the development of Sandy Hollow as a recreation swimming area. 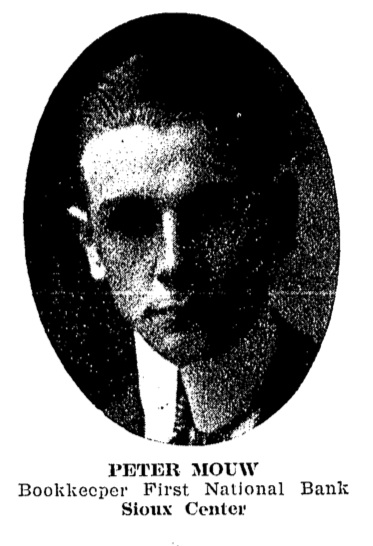