Ringert Cornelius Jongewaard was born in Pella, Iowa, Dec 23rd 1859. At the age of four year he went, with his parents, in a covered wagon over the Oregon trail to Oregon . Twice during their long journey they were attacked by Indians, who killed their horses and cattle. After 4 years in Oregon he journeyed with his parents over the Panama route via New York back to Pella in 1868. An interesting experience which Mr. Jongewaard enjoyed telling was when he was lost in the depot in New York City, taking the wrong train to Chicago. He had only a cloth sack with dried apples in it. He parents telegraphed to Chicago asking the depot agent to take care of him until they were to arrive the following morning. Such a welcome when the family was reunited and they continued their journey to Pella.

At the age of 10 years, In 1869, he accompanied his father, Cornelius Jongewaard to Sioux County. He was the only lad in the group. They chose a suitable spot for a homestead in that part that was surveyed the year before for settlement, by a Government commission. The group of settlers travelled from Pella to Sioux City by train and rom there with horses over prairie roads to Sioux County. In 1870 the Jongewaard family settled down on a homestead near Orange City.

On May 21 st, 1885 R. C. Jongewaard was united in marriage with Miss Jennie VerPloeg. The marriage took place in Welcome township before Sioux Center was incorporated. They made their home on a farm neat West Branch, where they lived almost 10 years. Five children were born there ; Nellie (Mrs. Redeker), Neal, Conrad, Lizzie and Helena. In 1894 they moved to Sioux Center to a home in the north west part of town where Mr. Jongewaard continued to works as a cattle buyer. While living in this home four children were born: Mina, Maria, Alice and Harold. For a few year he was in the furniture business, having bought out T. Vander Ploeg, and Charles Vander Ploeg worked for him to whom he later sold his business. R. C. Jongewaard was also a licensed embalmer. He was a member of the Board of Education for many years up to the time of his death, Feb. 12, 1915.

R. C. Jongewaad, of Sioux Center, one of Sioux Countys well known citizens, passed suddenly early Friday a. m. Feb 12, 1915. Ten days before he submitted to an operation for appendicitis. The operation was successful but complications developed and he passed away before medical aid could arrive. The doctors said his passing was due to pulmonary embolism. Rev. Oossewaarde, of the Central Reformed Church was in charge of the funeral service. He was a member of that church. 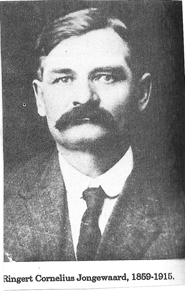