Stanley L. Greigg was born in Ireton in 1931 and lived here with his family for several years. He eventually moved to Sioux City and later served as that citys mayor; he also served for a time as the Dean of Men at Morningside College. He served as 6th District congressman in the U. S. House of Representatives from 1964-1966. In 1967 he was named director of the Post Office Departments office of Regional Administration, supervising the nations 15 regional offices and six postal data centers.

In 1970, he was named director of the Office of Campaigns and Party Organization for the Democratic Party, and in Nov. of 1972 was named as department chairman of the Lawrence F. OBrien International Center for Study of Political Processes at Dag Hammerskjold College near Washington D. C.

He later served as chief deputy to Democratic Party chairman Lawrence F. OBrien, and held that position at the time of the famed Watergate break-in. He was the first government official called that evening and he signed the complaint against the original five defendants in the political scandal.

While serving as 6th District congressman, he played an important role in securing the new post office facility at Ireton, Iowa. 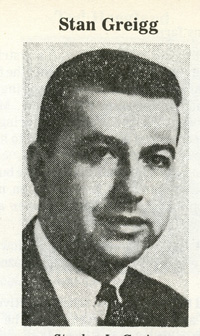