This biography was compiled by Wilma J. Vande Berg of the Greater Sioux County Genealogical Society and taken from various identified sources. Purpose was to find as much about the Nicolas Schneider family as is available in local sources. When family information is taken from various sources it is often found that the information varies from one source to another. Often birth places and dates are listed differently by various family reports. The information in this biography was stated as found in the source addressed.

Nic Schneider was born March 10, 1854 in Welsweller [Wiesviller] Lorraine France. His parents were John Schneider and Catherine Schuver. He had two brothers Jacob the oldest, and John the youngest, and one sister Mary who died at the age of 21 of small pox. His parents were linen weavers. After coming to America he worked on a farm near Columbus, Wisconsin for some years. In 1889, he and his brother John bought a team of horses and a covered wagon and started for the Dakotas. They reached northwest Iowa in about three weeks and visited Nic Henrich. They like the country so well they bought land here paying $9.00 an acre. June 29, 1882 he married Anna Baw In Doylestown, Wisc. Ann was born Jan 6, 1862. Their children include John, Catherine, Francis, Anna, Edward, Charles, George, Clara, Chris & Hilda. Nic died in Los Angeles CA. March 11, 1930. He went for a walk and was hit by a car. Anna died of a heart attack in Oregon Dec. 6, 1928.

RESEARCH NOTES  From a family report on Ancestry.com submitted by others

CHILDREN of Nicholas Schneider and Anna Baw, some obits were added for the children from local archives :

3. FRANCIS G. SCHNEIDER born 23 Oct 1887 and died 21 Feb 1970 Alton IA She married Henry John Ahlers 1890-1950 They had children Saverna, Odilo, Angeline and Alice Ahlers Source: Sioux Center News, February 26, 1970. MRS. HENRY AHLERS Funeral services were held at St. Joseph's Catholic church in Granville at 10:30 a.m. February 25 for Mrs. Henry Ahlers, 82, of Granville, who died February 21 at her home of a heart ailment. Services were conducted by the Rev. Cecil Friedman of Algona and burial was made in the parish cemetery at Granville. Mrs. Ahlers, the former Frances Schneider, was born October 28, 1887, at Alton and was a lifelong resident of Granville. She was married to Henry Ahlers at Alton September 15, 1914. Survivors include a son, Odilo, of Salix; three daughters, Mrs. Savrena Fisch and Mrs. Angeline Klein, both of Granville, and Mrs. Alice Schlichte of LeMars; 27 grandchildren, seven great grandchildren; three brothers, George and Ed, both of Granville, and Chris of Alton; three sisters, Mrs. Jake Friedman of Alton, Mrs. Bill Hodapp of Las Vegas, Nev., and Mrs. Leo Blanchette of Newburg, Oregon.

7. GEORGE M. SCHNEIDER born 8 May 1896 Alton IA died 25 Jan 1971 Granville IA He married Cathrine
Funeral services were held at St. Joseph Catholic Church in Granville at 10 A.M. today (Thursday) for George M. Schneider, 74, retired farmer of Granville, who died January 25 at the Orange City hospital. Services were conducted by the Rev. John Schissel and burial was made in the Parish Cemetery. Mr. Schneider was born at Alton, May 8, 1896. He was married to Kathryn Spieler February 25, 1924, at Granville. He farmed in the Alton and Granville area most of his adult life. Survivors include the widow; a son, Gordon, of Granville; two daughters, Mrs. Hilary (Pauline) Klein of Granville, Miss Ruth of San Diego, Calif.; two brothers, Ed of Granville and Chris of Alton; three sisters, Mrs. Catherine Friedman of Alton, Mrs. Clara Hodapp of Las Vegas, Nev.; and Mrs. Hilda Blanchette of Newberg, Ore.; and two grandchildren. Source: Sioux Center News, January 28, 1971

OBITUARY of Nicholas Schneider 1854-1930
Source: Alton Democrat (3-14-1930) Born: 1854 Died: 1930 NICHOLAS SCHNEIDER DIED TUESDAY IN LOS ANGELES--SKULL FRACTURE Nicholas Schneider was knocked down in some manner in Los Angeles, California, Saturday afternoon and his skull fractured with the results that he died Tuesday morning without regaining consciousness. His son George left here Sunday morning, arriving there Tuesday night and John Schneider, another son, of Newberg, Oregon, arrived in Los Angeles Tuesday morning.
It is believed that Mr. Schneider was hit by a car while crossing the street and at first it was rumored that a hit and run driver had caused the fatal accident, but little is known as yet about the tragedy except what has been gleamed from short telephone conversations with relatives in Los Angeles. The body is being held there pending an inquest and presumably criminal action against the driver of the car. As yet no information can be given as to the time of the funeral which will be held at St. Marys Church, Alton.
Mr. Schneider had gone to Oregon last August where his son John and daughter, Mrs. Leo Blanchett reside, after spending the previous winter, spring and summer with children here following the death of Mrs. Schneider who was buried here in December, 1928. He was spending the winter with relatives in Los Angeles.
He owned nearly a section of land in Sioux County which is farmed by sons, besides land in Oregon, near Newberg. He was married to Miss Anna Baw at Boylestown, Wisconsin, June 29, 1882 and the same year came to Sioux County, where they started farming. Six years ago next March , Mr. and Mrs. Schneider moved to Oregon where they resided at Newberg until Mrs. Schneiders death a year ago last December.
Ten children survive their parents as follows:: John of Newberg, Oregon; Mrs. Jacob Friedmann (Catherine) of Alton; Frances, Mrs. Henry Ahlers of Granville; Edward of Alton; Anna, Mrs. Martin Streff, of Alton; Charles of Granville; George of Alton; Clara, Mrs. William Hodapp, Granville; Chris, Alton; and Hilda, Mrs. Leo Blanchett of Newberg, Oregon. He is also survived by one brother, Mr. John Schneider of Alton.
Mr. Schneider was a splendid upright citizen, whose death comes as a shock to a host of Alton friends.

OBITUARY of Anna Baw Mrs. Nicolas Schneider 1862-1928
Source: Alton Democrat (12-14-1928) Born: January 6, 1862 Died: December 6, 1928 Mrs. Nicholas Schneider, a resident of the Alton vicinity until nearly five years ago, ever since 1882, died last Thursday at her home new Newburg, Oregon.
Mrs. Schneider had been suffering from high blood pressure and died suddenly at about 12:30 P.M. while sitting in her rocking chair.
She was 66 years and 11 months of age at the time of her passing. Anna Baw was born in Baltimore, Maryland on January 6, 1862. While a young girl she moved with the rest of the family to Boylestown, Wisconsin, where she met Nicholas Schneider. They were married there on June 29, 1882 and the same year came to Sioux County where they commenced farming. In this occupation they were very successful on their fine farm east of Alton, and as they were able, purchased more land in the vicinity.
It would have been five years ago next March when Mrs. Schneider moved with her husband to Newberg, Oregon. Their son John and daughter, Mrs. Leo Blanchett also reside there.
Ten children were born to the happy couple all of whom with the sorrowing husband, survive their mother. They are as follows: John of Newberg, Oregon; Mrs. Jacob Friedmann (Catherine) of Alton; Frances, Mrs. Henry Ahlers of Granville; Edward of Alton; Anna, Mrs. Martin Streff, of Alton; Charles of Granville; George of Alton; Clara, Mrs. William Hodapp, Granville; Chris, Alton; and Hilda, Mrs. Leo Blanchett of Newberg, Oregon.
Besides the children the following brothers and sisters survive: Joe Baw of Chicago; step-brother; Mrs. Lena Kauffman of St. Paul, Minnesota; John Baw of St. Paul, Minnesota; Mrs. Mary Strotter of St. Paul, Minnesota, step-sister; Will Baw of Doylestown, Wisconsin; Mrs. Tillie Smith of Randolph, Wisconsin, step-sister, and Mrs. Mary Philips of Benton Harbor, Michigan.
Requiem High Mass was held Tuesday morning at St. Marys Catholic Church here, in charge of Reverend Henry Pick of Templeton with interment at St. Marys Cemetery. Pallbearers were John Minten, Math Minten, W.F. Kellen, M. Zenk, Theodore Wagner and Peter Kellen, all former neighbors and friends.
All the children were present with the exception of Mrs. Blanchett who was unable to come from Oregon.
Mrs. Schneider was a devoted Catholic, a member of the Rosary Society, a splendid mother and wonderful friend. The Alton Community of which she was a part for so many years joins with that way out in Oregon in extending heartfelt sympathy to the bereaved family.

[comment by submitter  The step siblings of Anna Baw Schneider may actually have been half brothers and sisters as Annas father married after her mothers death and had more children, according to a report on ancestry.com]

This picture was in the St. Marys Church book page 212. 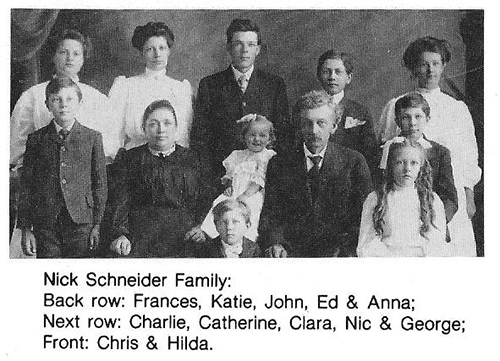