This biography was compiled by Wilma J. Vande Berg of the Greater Sioux Count Genealogical Society and taken from various identified sources. Also see the BIOS of his brother Mathais Probst 1832  1915 for more of the original family brothers information.

NICKOLAS PROBST FAMILY FARM Alton Centennial Book 1883-1983 page 103, has family picture.
Nick Probst, born in 1841 in Nichelbouch, Luxembrough, immigrated to the United States in 1869 and settled in Alton two years later in 1871. At that time he homesteaded 160 acres of land four miles southeast of Alton. In 1878 he married Mary Haberman of Heron Lake, MN and they returned to Alton to farm and raise their family of four children. In 1894 they retired and moved to Alton. The Nick Probsts celebrated their 50 th wedding anniversary on April 22, 1927. Nick died in 1931 and at the time of his death he was the oldest citizen in Alton at an age of almost 90 years old.
The farm passed on to Nicks second son Otto in 1894. Otto married Anna Konz and they had 10 children. 5 boys and 5 girls. When Otto retired from farming in 1945 one of his sons, Kenneth, farmed the land for a time, however, another son, Rodney, moved onto the farm in 1954 and continues to live on the farm and farms the land today. (1983)

PRAIRIE CATHOLIC CHURCH The Story of Sioux County by Charles Dyke pages 124 and 126 mentions that a small prairie church was built on the Probst farm south east of East Orange Alton. It was taken down when St. Marys church was built in Alton.

1. Mathias Probst born 4 Dec 1880 Alton IA died 21 Feb 1945 Alton IA Alton Democrat March 1, 1945 Matt Probst lifelong resident of this community Mr. and Mrs. Matt Probst met with tragedy last Wednesday when the car they were driving was struck by the C. & NW. passenger going east. Mr. Probst lived only a few minutes after the collision and Mrs. Probst was rushed to the Sacred Heart hospital in LeMars where she is reported to be improving.; She received a broken arm, severe head and body bruises. Mr. and Mrs. Pobst were coming to town from their farm, the road was very slippery and apparently the car slid into the engine on the front of the train. Mrs. Probst remembers seeing the train and calling out to her husband, but had no recollection of what happened after that. Phil Hoffman Jr. driving east had stopped on the other side of the train and saw Mrs. Probst fly into the air. He had gotten her into his car with the aid of Henry Van Boxtel, who lives near the crossing, when they noticed Mr. Probst lying under his car. Mr. Probst breathed his last just as Dr. Murphy arrived and the latter rushed Mrs. Probst to the hospital. Although it was first reported that the couple jumped from the car later evidence is that they were thrown out when the car hit the train. One car door was open, the other jammed shut and the front end of the car was smashed in, but the rear hardly touched.
The couple were coming to town according to their custom twice a week to do their shopping and spend the evening with their daughter, Mrs. Bert Reuter and family. The accident happened at about five o'clock. Matt Probst was born Dec 4, 1880 on the Probst farm southeast of Alton, the son of Mr. and Mrs. Nick Probst, pioneer settlers of that neighborhood. He was married Feb 22 1916 to Susan Konz at St Mary's church. One daughter, Merina, now Mrs. Bert Reuter was born to them. Others besides his wife and daughter surviving Mr. Probst are his two granddaughters, Margie and Carol Sue Reutera sister, Mrs. Theo. Haberman of Fulda, Mum.; and two brothers, Otto Probst of Alton and Albert Probst of Homer, Nebr.
Funeral services were held Saturday morning with requiem mass at St. Mary's church in charge of Rev. Fandel. The church was filled with sorrowing relatives and friends. Mr. Probst was a fine neighbor, always ready to lend a willing hand besides being a devoted husband and father and an excellent farmer. (There is a huge list of the people who attended the funeral listed )

3. Catherine Probst born 9 Jan 1883 Alton IA died 25 jan 1863 Nobles County MN Source: Alton Democrat (2-14-1963) Born: January 9, 1883 Died: January 25, 1963 RITES AT FULDA FOR MRS. HABERMAN Funeral services were held January 30 at St. Gabriels Catholic Church in Fuda, Minnesota for Mrs. Catherine Haberman, 80, who died January 25 at the Cashel Nursing Home in Worthington. Reverends Thos. Duane and Clayton Haberman officiated. Mrs. Haberman, nee Catherine Probst, was born January 9, 1883 at Alton, daughter of Mr. and Mrs. Nicholas Probst. She attended school here and was married to Theodore Haberman January 30, 1906, at Alton. They farmed in West Graham Lakes Township, Minnesota until 1937, when they moved to Fulda. Mr. and Mrs. Haberman celebrated their 50th wedding anniversary in 1956. She was a member of the Altar Society and Ladies Aid of St. Gabriels Church. Surviving are two daughters: Mrs. Howard Thomas (Irene) of Redondo Beach, California, and Mrs. Alvin Worden (Bernice) of Fulda; 21 grandchildren and 18 great-grandchildren; a brother, Otto Probst. She was preceded in death by her parents, husband, one daughter, a sister and two brothers. Interment was in St. Marys Cemetery at Dundee, Minnesota. Attending the services from Alton were Mrs. Habermans only brother and his wife, Mr. and Mrs. Otto Probst, several nephews and nieces from this vicinity, including Mr. and Mrs. Clarence Probst of Remsen, Mr. and Mrs. Tony Frederes, Rodney and Milo Prost all of Alton; also Mrs. Charlotte Gaffney of Alton, who was bridesmaid at the Haberman-Probst wedding in 1906.

THE LUXEMBOURGERS  MIGRATE TO SIOUX COUNTY IA
1908 Atlas of Sioux County Iowa part III Section 2 Page 13 Describes the Luxembourger migration to Sioux County in 1870 which included the Probst families. Reminiscence by Peter Hansen.      Through the influence of Peter Gehlen, at that time a resident of Jackson County, seventeen men, some single and some married, left Jackson County on the 2nd day of May, 1870, with eighteen prairie schooners; drawn by oxen. It took eighteen days to cover that distance, thus landing in Sioux County May 19th, 1870. We came via Waterloo, Fort Dodge, Storm Lake and Cherokee. The names of this original colony and as near as I can remember, where they settled, are as follows. Franz Hansen homesteaded on section 18, East Orange. P. and N. Ginsbach on section 34, Nassau. Peter and Henry Frantzen, section 26, Nassau. Michael Konz and Mike Biever, section 24, Nassau. Peter Wagner, Peter Gehlen, Theo. Gehlen, Nic Nemmers and Frank Arens on section 5, East Orange. Math Harens, section 26, Floyd. Peter Ney, John Perlot, Henry Remacle and Peter and John Christiany all settled in Floyd Township.
The above were all Luxembourgers and had the zeal of the early Christians, so were not slow in providing a place of worship. (See Very Rev. Brunes' sketch of early Catholic settlements in Sioux County in sketch of St. Mary's congregation of Alton, Iowa.)
Other early settlers in the German Catholic Colony were Nic and Matt Probst, who homesteaded on section 18, East Orange. Nicholas Kellen, father of Math, John, Peter and Camellus Kellen, now prominent settlers In this community. Joe Krebs, Jacob, Theodore and Nicholas Klein, John and Nicholas Schneider, H. and P. Goebel, J. and G. Gerst, N. and P. Schaul, N. and J. Henrich, M. Streff, M. Schroeder, N. Koob, Michael Haupert, Joe Budde and others the writer cannot remember.
Homesteads were all gone in and around Alton in 1871. Railroad land, while the homesteads lasted, sold at $1.25 per acre.
The grasshopper raid came in 1873 and they were with us for several seasons. Some years all the crop was destroyed, others only a part. These were truly years of discouragement. All of us, no doubt, would have left if we had had enough means to get away, but as it was we had to stay, which after all proved a blessing to us all as this has surely become a garden spot. East Orange and Nassau were originally one township called Nassau, but in 1875 East Orange became a separate organization by an act of the Board of Supervisors in 1875. When organized there were only enough voters, so every one could get an office

OBITUARIES of Nicholas and Mary Probst Seems odd both Nicholas and Marys obit are in missing issues of the Alton democrat.
Probst, Nicholas born 1841 died 17 Feb 1931 buried in St. Marys Cemetery Alton IA.The issue of Feb 20, 1931 is missing from the digital newspaper archives on line.
References in the Feb 27th issue to those attending the funeral were printed. Note: From Ancestry.com (by Others) Nicholas Probst was born July 1, 1841 in Michelbouch, Diekirch, Luxembourg, to John J. Probst and Catharine Stevens. He married Mary Haberman April 22, 1878 Heron Lake MN. They had five children, He died Feb 17, 1931 at Alton IA. Children Mathias 1880, Margaret 1880, Catherine 1883, Otto 1884 and Albert 1886.

The picture is of the Nicholas Probst family found in the 1908 Atlas Part IV Section 3 page 38. 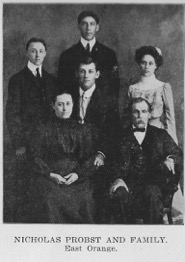