Jan Hospers 1801  1888 and Hendrika Middelkoop 1808 1887 were the parents of Hendrik Henry Hospers 1830 -1901. He was called the father of Sioux County IA as he was very instrumental in starting the Orange City Colony. See Henrys Bios story at Sioux County Photos - People (iagenweb.org) Along with several pictures of his siblings and children.

TRANSLATED FROM THE DUTCH BY JACOB VAN DER ZEE
[John Hospers, writer of the diary of which the following is a translation from the Dutch language, was born at Amsterdam, The Netherlands, on the 30th of August, 1801. He taught school from an early age until he emigrated with his family and scores of other Hollanders to the State of Iowa, where in the year 1847 several hundreds of his fellow-countrymen under the leadership of Rev. Henry Peter Scholte had established Pella in Marion County.

The reason which moved Hospers to seek American shores was later expressed by himself in a brief autobiography as follows:

"In all my positions the Lord had furnished me a liberal income and livelihood. . When I made busy to emigrate to America, everybody expressed surprise and asked why I should go, I who was so well-to- do and so generally esteemed.

"I had an income more than sufficient to enable my family to live in a respectable manner, but inasmuch as I laid most stress on the education and training of the youth, I could not bear to see the Bible kept out of the schools and education no longer Christian. And although God's Word had never been excluded from my school, and the instruction however defective  had been presented in a Christian way so far as I could, since the inspector of my school, Haefkens, never personally forbade me, I knew nevertheless what his orders were, and therefore I preferred to remove to a free country where I could worship my God unhindered according to the dictates of my conscience.

"My desire to emigrate was increased also by social relations with true Christian people who were rare in that day. In the winter of 1848-1849 A. C. Kuyper, J. Maasdam, and myself united to act as a committee to promote a second exodus to North America. Kuyper had Rotterdam and vicinity; Maasdam took Utrecht and North Holland; and I had South Holland, North Brabant, and Gelderland."
Thanks are due to Mr. Nicholas Hospers of Pella, Iowa, for permission to read and use his father's autobiography and diary. [Translator.]

***********
See a full copy of Jan Hospers diary, google search - DIARY OF A JOURNEY FROM THE NETHERLANDS TO PELLA IOWA IN 1849 It gives an every day vivid account of all that was encountered of the typical sailing vessel crossing the Atlantic at those times.

Several of their sons besides Henry, also came to Sioux County IA. They being William Hendrik 1844, and Cornelis Hospers 1854. Nickolaas Hospers born 1836 stayed and propagated in the Pella area, as well as J. De Gelder Hospers born 1838 who are mentioned in the Pella book Suvenir History of Pella, pages 171 & 172. Also pictured and listed in that book page 172 is a daughter of the family Eva Hospers, Mrs. Dr. H. S. Baron See Hospers siblings pictures of those that were available on the page of Henry Hospers at - iagenweb.org/sioux/photos/pic_HospersHenry.htm

FAMILY OF JAN HOSPERS
According to a family report on ancestry.com (done by other than submitter) 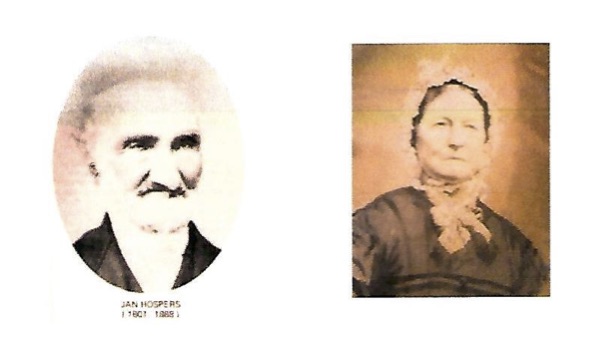