This story came from the Sioux Center Centennial Book of 1991 page 515 and was submitted to the book by Bernice Sandbulte. It was transcribed for this BIOS by Wilma J. Vande Berg and some research notes were added.

Aartje Rozeboom (Mrs. Beert Rozebooms) parents were G. H. Schoep and Johanna Berkhoff. G. H. Schoep was born Aug 17, 1838 and died Dec 31, 1917 at the age of 79 years. Johanna Berkhoff Schoep was born Aug 7, 1836 and died in Oct 1907 at the age of 71 years. Their children were Louisa, Peter, Aartje, Gerret Cornelius, Johanna, Jan Gerret, and Hattie. Aartje could still remember her grandparents. They lived in Apeldoorn Gelderland Netherlands. It was a 2 hour walk from her parents to her grandparents. Grandfathers name was Gerret Cornelus Schoep and Grandmothers name was Louisa Rowenhorst.

Granmother was a God fearing and warm hearted person and we thought a lot of her. Grandfather was a miller. They had 3 daughters and 5 sons and my father was the oldest. Since the job of milling didnt bring in much money the children as soon as they were old enough had to find work. Father often said he left home at 12 years of age and went to work in Epe for food and clothing. After he worked for a few years he married Johanna Berkhoff who was 23 years of age. They stayed in Epe for 4 years and Louisa and Piet and Aartje were born in Epe. Then they moved to Rotterdam and lived there a few years and then to Apeldoorn, where Gerret and Johanna were born.

Then they moved to Zevenaar where father was a mill worker. Father was a man who like to move. I can remember when we lived at Zevenaar and he had a corn mill and had an accident. A large stone from the mill fell on his head from which he kept a scar all of his life. From Zevenaar we moved to Wijk. We had saved some money and father bought a piece of land and we built the mill and a good house and this was in the year 1872. John was born there. Later he also built a store and bakery. He also built a barn for a cow and a pig. Mother often worked in the store. Hattie and also two children who died early were born there.

If the wind blew the farmers came with wheel barrows or a sack on their back to grind the flour, for the rye bread. As Grandmother Schoep had a brother in America, O. Rowenhorst, he would write how land could be acquired for nothing. So, they started to talk and think about going to America. A neighbor Hulshof wanted to go too. Then someone came to buy the place. So. they sold it. But before we were ready to leave we got letters from America that told of grasshoppers were so bad in America that we thought it best not to leave. This was the year of 1880. Now we had to find another place to live which was not easy. They found a place at Diren. But, they did not like it. All the time America was on our minds. After living there a half a year father decided to go to America alone and to look first. He went by train to Rotterdam and planned to go by boat from there. Fathers, brothers and sisters lived at Rotterdam, and when he visited with them they persuaded him so strongly not to go that after a few days he went home again.

The Lord leads us in all our ways. Now again we had to look for another place. We found a mill at Buurse at the edge of Duitsland (Germany). We still built a house that year. After living there a year we again got letter from America that it was so much better in America. Since my mother did not like it at all in Buurse because the people were so rough and drank so much whiskey. This had a great influence in getting us away from the Netherlnads.

They felt it was Gods will, so after much prayer we decided to go. We had a sale and packed only the necessary things and put them in 4 big trunks we had made by a carpenter. Mother hated to leave her loved ones, brothers and sisters, behind and go to a strange land which many called a land of thieves and robbers.

So in 1880 in the month of Sept. we moved from Buurse to Antwerpen. An agent sold us tickers for the boat the Red Star. When we got to Antwerpen we found out there was no room for us on the boat. They said we had to wait for a week. Father spoke with the agent who sold us the tickers and found out it was his fault, so his company paid all the expenses for our sleeping and food while we waited. A week later we started out. We were on the boat 11 days and then 3 days on the train to Alton, IA. Father, Mother, and 7 children. I was 15 years old.

Uncle O. Rowenhorst came with a wagon to get us from Alton. We were by Rouwenhorsts for 3 weeks and then in our own home. Father bought a farm east of Orange City for 9.00 an acre. We had a rough winter. We had snow from Oct until May. Never did we experience this again in the 54 years at the time I am writing this. We did not have fire wood or food for the cattle. After 2 years we sold the farm and bought a farm 4 miles E of Sioux Center.

We joined the First Reformed Church. In 1884 we had a chance to buy 80 acres of land close to church. We also had to buy 3 other farms if we wanted this one. We did this hoping to sell some soon. This we did . Father worked 160 arces west of Main St. In the same year the rail road came through Sioux Center. The depot was built where now the new town is.

This above information was taken from the diary of my grandmother, Mrs. Beert Rozeboom.

MARRIAGE RECORD of Gerrit Hendrik Schoep, a corn miller, age 23 and Johanna Berkhof age 25 were married at Epe Gelderland Netherlands on 25 Jan 1862. His parents were Gerrit Kornelis Schoep and Louisa Rouwenhorst and her parents were Pieter Louis Berkhof and Aartje Bosch.

In the old age of 79 years and about 4 months, New Year's Eve died gently calm, after already only time to have been suffering from cancer, Mr. G. H. Schoep. The deceased suffered no pain whatsoever. Mr. Schoep belonged to the oldest inhabitants of Sioux Center. He came 37 years ago with his family from the Netherlands and settled on 80 acres 5 miles N. E. of Orange City. He soon saw in what future Sioux Center had. He bought the Pekelder land and settled on the site in the old Sioux Center, where later the Punt family lived. That was in 1884. He had then bought 160 acres of land. When the railroad was built, he bought 80 acres of Mr. T. Prins, east of Main Street in Sioux Center, where now mainly the residence part of the city is. In 1890, he started a store in partnership ship with his son P. L. Schoep. After a few years, however, he withdrew from the business.
Ten years ago his wife died. Later He married the widow Boomgaars, who survives him.
He leaves the following children: P. L. Schoep, Mrs. Berend Rozeboom, Mrs. Wm. Remmerde, J. Schoep, and Mrs. N. Wassenaar. The funeral will be Friday noon at this place. At an hour there will be a home service at half past two in the second. Church, under direction of Rev. Haverkamp.
DeVolksvriend Orange City Jan 10, 1918
In Dutch  translated
My dear husband, children mourn the death of father and grand father G. H. Schoep, at the age of 80 years. We wish to thank all those who helped us while he was sick. Signed by the widow, children and grandchildren Sioux Center IA.
Also in same issue mentioned Mr. G. H. Schoep died the funeral was Friday at the 2nd Ref Church.
Note: According to a report on ancestry.com (by others) Gerrit Hendrik Schoep was born August 17, 1838 in the Netherlands. He married Johanna Berkhoff Jan 25, 1862 at Epe, Gelderland Neth. They had a large family. He died Dec 31, 1917 in Sioux Center. His parents were Gerrit Cornelis Schoep and Louisa Klaasdr Rouwenhorst.
He came to the USA in 1880 from Gelderland Netherlands. His wife Johanna Berkhoff 1838  1907. Children listed were  Louise Franken 1862-1908; Pieter Louis 1863-1934; Aartje Rozeboom 1865-1952; Gerrit Kornelis 1868-1889; Johanna Schoep 1869-1951; John G. 1872-1955; Hattie Wassenaar 1875-1947; Gerharda Schoep 1875-1947.

OBITUARY of Johanna Berkhoff, Mrs Gerret Hendrik Schoep 1836-1907
Schoep, Johanna Mrs. G. H. nee Berkhoff born abt 1836 died 1907 buried in Sioux Center cemetery Sioux Center IA.
See the obit of Gerrit H. Schoep 1838-1918 for more family details.
Sioux Center Nieuwsblad of 16 Oct 1907 In Dutch
Attempted translation:
Obituary:
Today, the 10th of October 1907, it has the Lord, who does not justify his deeds, but bestowes everything with wisdom, pleased him to take from our side, our deeply beloved Spouse and caring Mother, Mrs. Johanna Schoep, born Berkhoff, in the blessed age of 71 years, 2 months and 3 days, of which we were allowed to generate a sufficient married life of 45 years and 9 months . It is difficult for us to lose this loss, but we pray and hope that we can bear it in subjugation and patience, she was only sick for 3 1/2 days and was allowed to go into the lifting without pain , the last hour sleeping. , with the assurance that her the forgiveness by the blood of Christ her Lord and Savior and also salvation should become destination.
Also on behalf of her Children and married Children. G. H. Schoep of Sioux Center IA 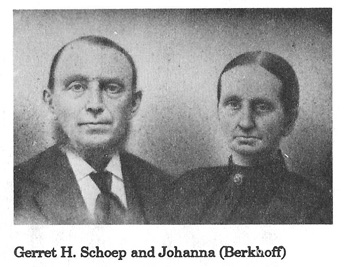