In the old age of 79 years and about 4 months, New Year's Eve died gently calm, after already only time to have been suffering from cancer, Mr. G. H. Schoep. The deceased suffered no pain whatsoever. Mr. Schoep belonged to the oldest inhabitants of Sioux Center. He came 37 years ago with his family from the Netherlands and settled on 80 acres 5 miles N. E. of Orange City. He soon saw in what future Sioux Center had. He bought the Pekelder land and settled on the site in the old Sioux Center, where later the Punt family lived. That was in 1884. He had then bought 1680 acres of land. When the railroad was built, he bought 80 acres of Mr. T. Prins, east of Main Street in Sioux Center, where now mainly the residence part of the city is. In 1890, he started a store in partnership ship with his son P. L. Schoep. After a few years, however, he withdrew from the business.
Ten years ago his wife died. Later He married the widow Boomgaars, who survives him.

He leaves the following children: P. L. Schoep, Mrs. Berend Rozeboom, Mrs. Wm. Remmerde, J. Schoep, and Mrs. N. Wassenaar. The funeral will be Friday noon at this place. At an hour there will be a home service at half past two in the second. Church, under direction of Rev. Haverkamp.

DeVolksvriend Orange City Jan 10, 1918
In Dutch  translated
My dear husband, children mourn the death of father and grand father G. H. Schoep, at the age of 80 years. We wish to thank all those who helped us while he was sick. Signed by the widow, children and grandchildren Sioux Center IA.
Also in same issue mentioned Mr. G. H. Schoep died the funeral was Friday at the 2nd Ref Church. 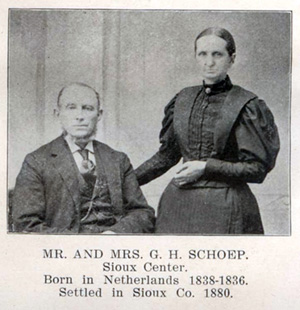