Professor Bergman was on the Graceland campus from 1919, when he first arrived to teach romance languages, until his retirement in 1964. During this time he served a variety of jobs but is perhaps best remembered for his work as registrar.

One of nine children, he was born in Utica, Yankton County, South Dakota, in [December 24] 1894. He moved with his family to northern Missouri in 1904 and it was there that he received his early schooling. He was graduated from Lamoni High School in 1913. He considered becoming a court reporter but chose instead to accept a four-year scholarship to the University of Iowa where he studied romance languages, completing his undergraduate degree in 1917. He graduated Phi Beta Kappa and French and Spanish with some background in German. After graduation he taught for two years at Cle Elm High School in Washington. He was teaching in Washington when President G. N. Briggs contacted him, asking if he would come to Graceland and teach Romance languages (French and Spanish) and German.

When Johannes Bergman came to the college in 1919 it had just become a junior college. At that time he taught Latin to the students in the academy and German, French and Spanish to those registered in the college. Professor Bergman became the head of the Department of Modern Languages. In [June 8] 1921 he assumed the responsibilities of registrar and held this position until his retirement from Graceland. In 1943, he was appointed to the Postwar Planning Committee which considered not only the social and academic impact of postwar years but also the long-range impact on the college and its role in relationship with the church.

In 1921, he married Miss Frances Rees who was then teaching in the Lamoni schools. He took an academic leave in 1922-23 and returned to the University of Iowa where he received his M.A. in languages. His thesis was entitled "The Priest and Other Religious Characters in the Novels of Ferdinand Fabre."

Professor Berman's trademark was the flower he always wore in his buttonhole, even on the coldest day of the winter.

While at the college he was interested in drama, dance, decoration, and worked in the community as a member of the Federated Garden Club, Lamoni Fireside Drama Club, School Board, Park Board, and was an active member of the Church Choir. The "Bergman touch" was famous in turning the Coliseum [Theatre] into the Lamoni Church via his floral arrangements. His arrangements also brightened many various functions such as homecomings and graduations. Professor Berman delighted audiences with his acting talents and his elaborate dances.

The Bergmans, who now [1972] reside in Lamoni, have four children.

NOTE: Johannes C. Bergman was the son of Gosse Bouwes "Gus" Sr. and Naentske "Nancy" (Rienks) Bergman. He married Frances Louise Rees on June 8, 1921, Lamoni, Iowa. Mr. Bergman died at the age of 87 years on October 5, 1892, Leon, Iowa. Frances Louise (Rees) Bergman was born in Montana on October 16, 1896, the daughter of John Lewis and Mary (Wooldridge) Rees. She died at the age of 96 years on November 18, 1992, Lamoni, Iowa. They were interred at Rose Hill Cemetery, Lamoni, Iowa. 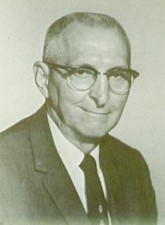