Mae Irene Kennedy, daughter of Miles N. and Viola M. Kennedy, was born at Seney, Ia., April 18, 1885. She attended Morningside College and taught in the rural schools in the vicinity of Seney for several years. On Oct. 20, 1910, she was united in marriage at Seney to J. Walker Bushby. They moved to the present farm home south of Ireton where they have always lived. Two children were born to this union, Jack, of Foreston, Minn., and William at home. Mrs. Bushby was a member of the Methodist church of Ireton.

She was taken ill Thursday, Oct. 30, and was taken to the Hawarden Community hospital where she died Sunday morning, Nov. 2. Mrs. Bushby is survived by her husband, two sons and two grandchildren, James and George Bushby of Foreston, Minn., and one step-brother, Clarence Kennedy of Long Beach, Calif.

Funeral services were held at the Methodist church with the Rev. E.J. Plummer officiating with burial in the local cemetery. Mrs. George Rose and Mrs. Russel Wade accompanied by Mrs. A.W. Bartlett at the piano, sang I Came To The Garden Alone and Sweet Hour of Prayer. Pallbearers were Hollis Wills, Clyde Wills, Herbert Vander Hamm, Harold Fritz, Clarence Muth, and Jurgen Harms.

SENEY:
Mr. and Mrs. Charlie Ewin and daughters, Ida Mae and Ruth, and Mr. and Mrs. Vernon Ewin called on relatives and friends in Seney Wednesday evening after attending the funeral of Mrs. Walker Bushby at Ireton. Miss Harriet Hawkins accompanied them to Minden, Neb., to visit in Ewin homes from Thursday until Monday, when she returned home. 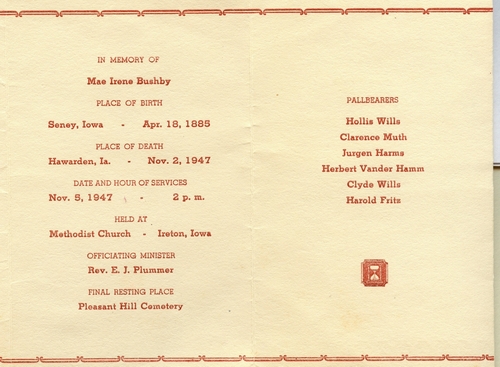