Due to the COVID-19 pandemic and the Governors proclamation, masks are mandatory and social distancing guidelines apply during all services. The Armstrong - Van Houten Funeral Home of Ute, Iowa is in charge of the funeral arrangements.

Lloyd John Swede Aronson was born at home on a farm in Charter Oak, Iowa, on July 29, 1932. The youngest of three sons born to Harry and Ida (Specht) Aronson. Swede grew up on the farm until the age of 11 when the family moved into town. He received his education and graduated from Charter Oak High School with the class of 1950.

After high school, Swede worked on a ranch in Colorado for a year before enlisting into the United States Airforce where he honorable served his country in Iwo Jima. On July 31, 1954, Swede married Carol Torgerson and the couple made their first home on Offutt Airforce base. Swede was honorably discharged.

The family moved back to Charter Oak and then later to the Ute area. During these times they welcomed their 5 daughters, Linda, Becky, Lisa, Brenda, and Regina. After several years of farming, Swede purchased the Mapleton Livestock Auction Company. Swede enjoyed auctioneering, operating, and owning the sale barn for many years.

After retiring from the sale barn, he continued to maintain a cow herd for several years. In his retirement the couple enjoyed wintering in Texas and spending their summers in Lake View, Iowa. For enjoyment, Swede liked playing cards, dancing, fishing and hunting, taking trips, and spending time with his family and friends. While always having a story to tell or a joke to share. But most of all, he cherished the time with his family. Swede was a member of the St. Pauls Lutheran Church of Ute, the American Legion and VFW posts of Ute of Iowa. 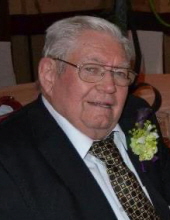