Marlyn Sue was born February 9, 1950, in Soldier, Iowa, the daughter of Milton Clarion and Burnetta Jean (Larson) Melby. She grew up in Soldier and graduated in 1968 from East Monona.

Marlyn Melby and Ron Kunze were united into marriage February 1, 1969 in Soldier, Iowa.

She worked for Mutual of Omaha in Omaha, Nebraska for one year. Marlyn and Ron moved back to Soldier, Iowa and owned and operated the lumber yard where she did the accounting for 8 years. She later worked various jobs at local businesses.

She was a member of the Soldier Lutheran Church, Soldier, Iowa.

She was preceded in death by her parents, Milton Clarion and Burnetta Jean (Larson) Melby; one sister, Sherry Little; and two infant brothers, Keith Melby and Ricky Melby. 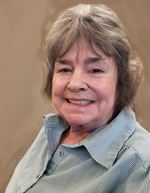