A Celebration of Life will be held at 10:30 A.M. Saturday, March 14, 2020, at the First Christian Church in Onawa, Iowa with Pastor Michael Lewis officiating. Burial will follow in the Onawa Cemetery. Arrangements are under the direction of Rush Family Care Service in Onawa.

Edna May Larson was born May 9, 1916 in Onawa to Eric Albin and Sarah Jane (Anderson) Larson. The second of four children, Edna attended school in Onawa, graduating from high school in 1934.

While in high school Edna showed the energy, organizational skills, and courage that characterized her life. She helped her family weather the financial challenges of the great depression by delivering pies and cakes for her mothers home baked goods business and cleaning homes. At the same time, she was on the high school speech team, achieving a 1st place finish in the Monona County Humorous Speech Contest her senior year. Edna pushed at the barriers that restricted women of that era by convincing a sympathetic janitor to let her and her girlfriends into the school at six a.m. to play basketball on the court that was reserved for the boys team only.

On January 25, 1936 Edna married Vernon Charles Anderson in a ceremony conducted in the church parsonage in Plattsmouth, Nebraska. To this union, two sons were born, Charles Arvid and William Allen.

The couple settled into the family farm west of Onawa and were promptly snowed in for a month as the winter of 1936 has gone down as one of the coldest and snowiest on record.

Edna excelled as a farm wife, raising her children, keeping books for the farm, and tending a garden. Her huge vegetable garden provided canned corn, green beans, tomatoes, and a potato crop that fed her family each winter. In addition, she was a Cub Scout den mother, a member of Eastern Star, and active in the First Christian Church in Onawa. The latter being one of the most important parts of her life as she read the Bible through several times and attended church services every Sunday, making sure her sometimes recalcitrant sons did so as well. Her deep faith also helped Edna overcome a debilitating 20-year bout of rheumatoid arthritis in mid-life which restricted her movement and caused her much pain.

Devoted to her family, Edna doted on her grandchildren and made their visits to the farm memorable in many, many ways. Later in life she became a fan of classical music and an avid reader. So much so, that as her eyesight began to fail, she switched to books-on-tape.

This world is not my home. I am just passing through, was a lyric from one of Ednas favorite songs. It was a life well lived by a woman who meant so very much to her family and friends. 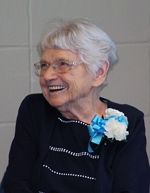