Herman Henry Neddermeyer, Jr. was born July 7, 1941, in Ute, the son of Herman and Elizabeth Neddermeyer. It was always remembered his family saying Herman was born the seventh month; seventh day; 7 pounds, 7 ounces; and seventh grandchild. He passed away Wednesday, Jan. 29, 2020, at the Crawford County Memorial Hospital in Denison, Iowa, at the age of 78.

Herman was baptized into Christ on Aug. 3, 1941, and confirmed his faith March 5, 1956. He received his education in the Ute school and graduated from Ute High School with the Class of 1959.

Following graduation, Herman began farming with his father. While Herman was his given name, most people called him Hermie. After several years of farming, he was also employed at Mapleton Livestock Auction and also hauled livestock for many area farmers. It was evident he never really retired, as people would still see cows and calves on the farm and Hermie on the skid loader.

Hermie was united in marriage with Marilyn Bruhn on Sept. 20, 1980, at St. Paul Lutheran Church in Sioux City. He lived his entire life on the home farm where he raised hogs and Black Angus and Dutch Belt cattle. He enjoyed barbecuing for seed corn field days and other occasions, as well as traveling to Hawaii, taking bus tours, visiting friends in Spirit Lake and attending his grandchildrens activities.

Hermie was a lifelong member at St. Paul Lutheran Church in Ute and was one who always handed out bulletins for services.

Preceding him in death were his parents and one stepson, Reggie.

Rev. Nathan Peitsch officiated the service with interment in the St. Clair Cemetery in Ute.

Organist Lynette Thies provided accompaniment for congregational hymns Lift High the Cross, There is an Hour of Peaceful Rest, and Abide with Me.

The family invited everyone to return to the church for fellowship and lunch provided by the Ladies Aid and catered by Staleys.

The Huebner Funeral Home was in charge of arrangements. 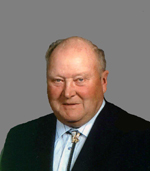