Earl Richard Schelm was born on Jan. 20, 1912, on the family farm north of Ute on a very cold day. His parents were Ferdinand and Estella Robb Schelm. He was the middle of three sons. He went to Heaven on Wednesday, Feb. 19, 2020.

Earl was baptized and confirmed by Rev. Amstein at St. John Lutheran Church in Charter Oak. He joined the Boy Scouts when it was first being organized and graduated from Charter Oak High School in 1929. He attended the University of Nebraska at Lincoln, majoring in architecture until the Depression when he returned home to help with farming.

In 1939, Earl married Irene Blanche Gardner at Kountze Memorial Lutheran Church in Omaha, Neb. They were blessed with two daughters.

Earl raised black angus cattle and enjoyed farming his entire life. He was a member of the Mapleton school board for 12 years. After retiring, he and Irene spent their winters at their home in Sun City West, Ariz.

He was preceded in death by his wife, Irene; his parents; two brothers, George and Edward; his grandson, Stephen Abrahamson; his niece, Marilyn Bretthauer; his nephew Edward Schelm, Jr.; and son-in-law, Marv Shawver.

A memorial service will be held on Saturday, March 14, at 10:30 a.m., at St. Matthew Lutheran Church in Mapleton, of which he was a member. 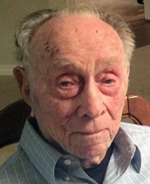