Buzz lived his entire life near Ute, Iowa. He graduated from Ute High School with the class of 1958 and after graduation continued farming with his father Edward. In 1959, Buzz enlisted into the Army National Guard and served his country until 1965.

On July 17, 1960, Buzz was united in marriage to Anita Rose in the St. Johns United Methodist Church of Mapleton, Iowa. The couple made their home on the family farm located between Ute and Mapleton and were blessed with three sons: Bruce, Brett, and Brian. Buzz could always be found around Ute and Mapleton spending time with his friends.

Buzz was actively serving on the St. Clair Township Cemetery Board of Ute. His favorite past times included spending time with family and friends at a bonfire with good food and a cold beer. He was a family man who treasured every moment with his wife, sons and their families.

Buzz was preceded in death by his parents Edward F. and Arlene Schelm; son Bruce; and sister Marilyn Bretthauer.

The family of Buzz Schelm wishes everyone in attendance to feel free to dress casually for the visitation and memorial service. 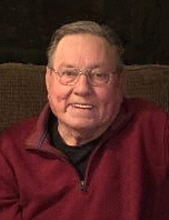