Funeral services for Marcia McKinley, 18, who died August 6, were held August 9 at the St. Ansgar Methodist Church with the Rev. Don Callen officiating.

Marcia received Christian baptism on March 25, 1956 at the St. Ansgar Methodist Church and was confirmed there in May, 1963. She attended Saint Ansgar Community School and was always an active participant in school activities. Throughout her high school years, she held class offices as well as offices in National Honor Society, Future Homemakers of America, German Club and Pep Club. She was also a member of Thespians and Science Club.

Always interested in Band, Marcia was a Division I clarinet soloist and was in many Division I ensembles at state music contests. To be selected as a member of the 1967 All-State Band and play in the Dorian Music Festival were honors she cherished. Science was another field to which she was drawn. In 1966 she and Cindy Novak won the Grand Award at the Saint Ansgar Science Fair. Marcia and her sister Ann shared this honor with Arthur Madsen this year. The Bausch and Lomb Award for high scholarship in the field of science was presented to her on Awards Day.

She was a "Saints" cheerleader for four years and president of Pep Club her senior year. To be chosen a homecoming queen candidate was a highlight of these activities. Marcia was proud of the sportsmanship of the Saint Ansgar student body and of the boys who participated in the school sports. Scholastically, Marcia strived for perfection. Her diligent and consistent pursuit of knowledge brought her the special honors of being selected a National Merit Finalist and of graduating first in the Saint Ansgar Class of 1967.

Not only did she apply herself to school activities, but also to her community and home. A member of the Synchronized Swimming Club and a Senior Life Saver, she was looking forward eagerly to the completion of the new swimming pool. The American Legion Auxiliary selected her as their 1966 delegate to Girl's State, a lesson in democracy she found fun and rewarding.

At home, her advice was sought constantly by her sisters and mother. She spent many happy hours sewing for herself and her family. She enjoyed working at Neeley's Drive-In the past two summers.

Burial was in the St. Ansgar cemetery with Rev. Callen in charge of the committal services.

NOTE: Marcia died as a result of a traffic accident west of St. Ansgar on Hwy 105. Cynthia Novak and Steve Borchert also perished in that accident. 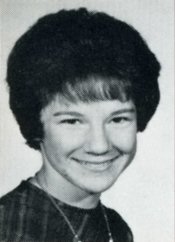