Lois Ethelyn (Danforth) Steinberg was born February 15, 1911 in Reeder, North Dakota, the daughter of Harry G. and Olive C. Danforth. At the age of nine her family moved to Little Cedar where she attended the Little Cedar School, and then Iowa State Teachers College, Cedar Falls (now the University of Northern Iowa). She taught in the rural schools in Newburg township, Carpenter, Spring Valley and for 14 years in the St. Ansgar schools for a total of over 30 years.

She married Harold E. Steinberg October 8, 1937 in the Baptist parsonage in Riceville. She was an active member of First Lutheran church in St. Ansgar and attended Deborah Circle and the ALCW. She was made an honorary member of the local I. C. Club in April 1979.

Mrs. Steinberg was preceded in death by her husband, Harold; and her parents.

She is survived by her three children: Mark of Marshalltown; Gene of Cedar Rapids; and Marcia of Mason City; one grandson, James of Cedar Rapids; two brothers, Wilbur Danforth of Olympia, Washington; also aunts, uncles, nieces, nephews and cousins.

Burial was in the St. Ansgar cemetery with Rev. Engelstad in charge of committal services.

Photo of Lois and Harold from the 1970 First Lutheran Church directory. 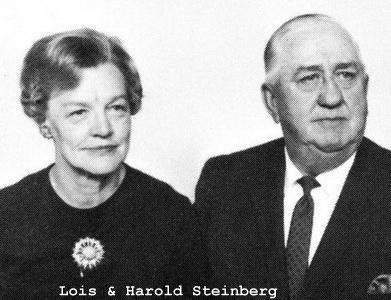